This tidbit harvested from the Pacific Strategies billings to Rob Reiner’s OC Children and Families Commission was way too good to pass up.

Here we see Mr. Conservative Pundit Matthew Cunningham hard at work setting up and then eating lunch with former OC Register editorial writer Steve Greenhut back in 2008. Looks like Executive Director Micahel Ruane went along. Maybe Cunningham acted as interpreter between the libertarian Greenhut and the social services bureaucrat Ruane. I guess that’s what they call a business lunch.

I wonder if the suffocating welfare statists persuaded Greenhut of the need for their commission. 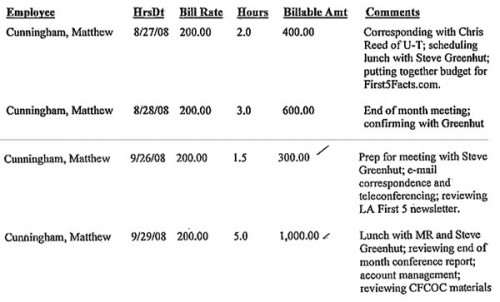 20 Replies to “Pacific Strategies – My Lunch With Greenhut”