In a ruling over a petition filed by the California Foundation For Fiscal Responsibility vs. the Orange County Employees Retirement System (OCERS), the Superior Court of Orange County ordered the OCERS to disclose “…gross amount paid to the payee member, the name of the payee, and the identification of the prior public employer of the named payee and no other information contained in the records OCRES.” 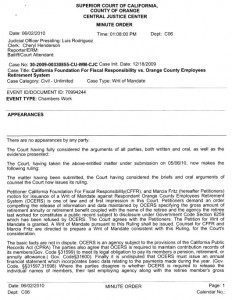 The presiding judge, Hon. Luis Rodriguez, says in his ruling, “Individuals must have access to government files to hold governments accountable for their actions. Personal embarrassment is outweighed by the strong public policy supporting transparency in government and the strong public interest in knowing how it spends its money ‘to expose corruption, incompetence, inefficiency, prejudice and favoritism.’”

This ruling is consistent with the premise that government can only be held accountable when there is transparency. Without transparency, corruption, incompetence, inefficiency, prejudice and favoritism cannot be identified, much less routed out.

6 Replies to “Judge Tells OCERS To Release Names and Pensions”