Last year just before Christmas the Fullerton City Council voted 3-1 to approve the idiotic Richman housing project, a staff-driven boondoggle that makes zero planning, housing, or economic sense. We wrote about it here.

We also wrote about the review of the same fiasco-in-the-making by the Planning Commission here, in which we lauded Commissioner Bruce Whitaker for his solitary stance in opposing it. As the YouTube clip shows, Whitaker objected on economic grounds citing the project’s dubious fiscal foundation.

This position was immediately questioned by Commissioner Lansburg who inquired about it of the city attorney, Tom Duarte:

The city attorney Mr. Duarte answered: In the commissions purview its a land use issue, the city council will look at the financial impact.

Well, the project was passed by a Commission majority, with only Whitaker dissenting. 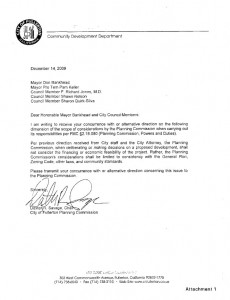 And now, Lo and Behold, the issue has been agendized by the City Council; and just look at staff’s response: economic considerations are indeed within the purview of a planning commission in many respects, and are nowhere prohibited. 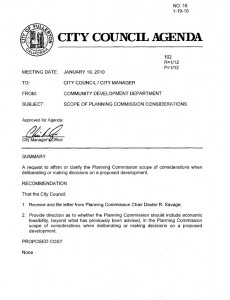 This response begs  several questions. Why did the city’s attorney misinform the commission? Is he incompetent, or was he motivated to press the approval of a project near and dear to the hearts of the city staff, without any reference to the law.

Why did the staff present like (John Godlewski) not correct him? He countersigned the above memorandum contradicting Duarte, yet was at the meeting and said nothing.

The facts can really only be interpreted in one way. Both the attorney and staff were more interested in the approval of the project, no matter how bad, than in the service of the public interest, or the truth, or the law.

Now the entire matter has been brought to the City Council for its enlightenment as agenda item #16 at the January 19, meeting. But it’s really to late for the Richman project – a Redevelopment/housing staff concocted project that has all the tell-tale signs of a disaster in the making.

And Friends: there you have it.

9 Replies to “Fullerton Decision-makers Lied To. So What’s New?”