Yesterday a complaint was filed with the District Attorney, Tony Rackaukas, against Harry Sidhu for falsifying public documents when he created a fake residence where he never lived in order to run for 4th District County Supervisor.

How do I know a complaint was filed? Because I’m the one who filed it.

First, take a look at my letter to Mr. Rackaukas. 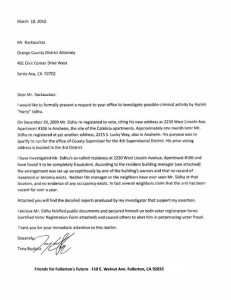 Now that’s some serious stuff, right? Here are some of my supporting documents.

At the end of December Harry Sidhu re-registered to vote at 2230 West Lincoln Avenue, #106, aka the Calabria Apartments.

Here’s the re-registration form from the end of December, 2009. 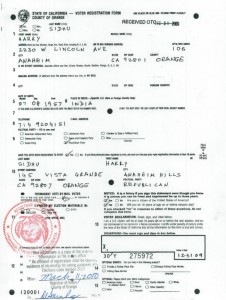 One month later Sidhu re-registered yet again, this time to a place called Lucky Way. He cited the Calabria Apartments as his previous dwelling. 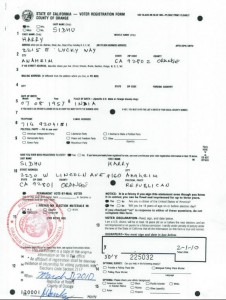 The only problem is that Sidhu never lived at the Calabria Apartments. Our investigation revealed that nobody, including the apartment manager and neighbors ever saw Sidhu there; no furniture was ever moved in; that the unit in question appears to have been vacant for a long time; that no leases or receipts exist to document Sidhu’s alleged tenancy. 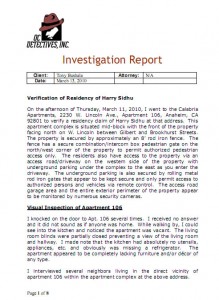 It’s crystal clear. Harry Sidhu concocted a phony address in order to run for office in the 4th District and he never lived there. That was an outright lie. And he lied again when he changed his registration a second time citing 2230 West Lincoln as his previous address. This is blatant voter fraud and a knowing falsification of public documents.

I have no doubt that some in the political community will want to brush aside this sad, inconvenient truth as inconsequential. Sidhu will no doubt play the victim card like all politicians do when they get caught in a trap created by their own overarching ambition and arrogance.

Was a crime committed? Well, that’s for the DA to decide, or perhaps to lateral the issue to the State Attorney General. You can be sure we’ll keep you informed.

45 Replies to “Criminal Complaint Filed With DA Against Harry Sidhu”