“It’s good to be king!” Indeed, if you are Cal State Fullerton’s president, Milton Gordon, you are living the good life at the old Chapman family property known as the El Dorado Ranch at 225 West Union Avenue. Gordon’s residence is a sprawling 4+ acre palatial estate sitting high in the Fullerton hills overlooking the commoners eking out a living below and no longer appears to be a working ranch despite its name. 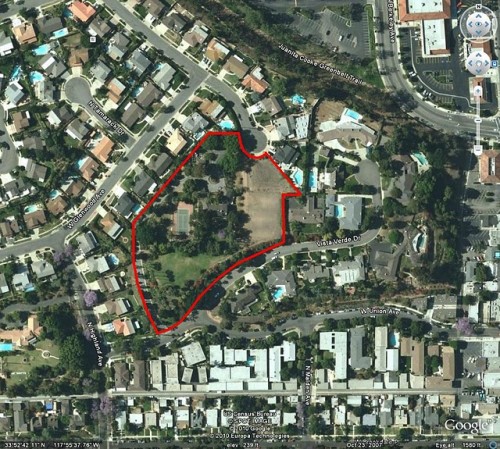 The 8+ room mansion may be slightly dated from the 1950s but the age is compensated for by the 8 bathrooms!   The nearly 6,000-sqft palace was a gift to Cal State Fullerton back in 1989 from C.J. Chapman, Jr., Mary Anne Baine, Elizabeth E. Bowman.  They also gave the Cal State Fullerton Foundation $159,000 for maintenance.  Currently, this enormous public property is valued at $3,351,724 for tax assessment purposes (although the property is exempt from actually incurring property taxes).  I would guess the value to be more like $4,000,000 in a “normal” economy.  The secluded compound is an excellent destination for Fullerton residents and tourists alike to visit although there is no formal docent to guide you.

It would have been nice if the Chapmans would have sold the property out-right and used the proceeds for a scholarship endowment.  The money would go to those who need it the most.  Milton A. Gordon is among the highest paid public employees earning $302,042 according to the Sacramento Bee!  I guess it’s hard to afford a Fullerton home on $302,042 per year.

The Chapman family has given and given and given to Orange County residents in one way or another, for many years.  We have all benefited from them in several ways.  Every time I have someone from out of town visit me at my college, I have to specify “Chapman Avenue in ORANGE, NOT FULLERTON.”  Then when I have out-of-towners visit mom, I have to specify, “Chapman Avenue in FULLERTON, NOT ORANGE.”  They still get it wrong…  In 1954 the Chapman’s were nice enough to build that nice university bearing their name where your son or daughter can attend for $18,750 per semester.

Here is an interesting fact: Milton A. Gordon was named CSU Fullerton president in August, 1990. So it seems that the Chapman’s and Gordon timed it just right to get the El Dorado Ranch in the hands of Gordon.  Gordon being a mathematician could do the math and see the sweet deal, leading me to wonder what more there might be to this back story.  For Gordon, it’s still good to be king!