Earlier FFFF noted the story of an Anaheim activist who says he was wrongfully arrested after speaking out against OC Sheriff candidate Craig Hunter at Anaheim city council meetings.  James Robert Reade claims that several officers questioned him about his anti-Craig Hunter speeches shortly before arresting him on false premise that he was under the influence of narcotics.

Yesterday Reade took his accusations a step further and filed an $85,000 claim against the city of Anaheim, saying he was “attacked and brutalized by two Anaheim officers under color of authority.” 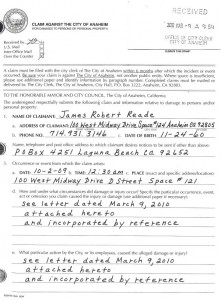 In the claim Reade presents drug tests from both the OC Crime Lab and St. Jude hospital that show there weren’t any narcotics in his system on the day of his arrest. Reade further asserts that he has never used drugs in his life and should never have been detained.

The city dropped all charges against Reade after determining that the officers made a misdiagnosis of Reade’s behavior. Officers were disciplined and sent to additional training for mishandling the incident.

At best, we could consider this another example of the culture of abuse coddled by decades of poor leadership at Anaheim PD under the control of Craig Hunter. That certainly lines up with what courts and civil rights activists have said over the years.

On the other hand, the officers’ prior references to Reade’s political activities suggest something far more malicious may have happened. If the department intended to silence an outspoken activist as Hunter was about to begin his campaign for Sheriff, that would be an inexcusable abuse of authority.

Obviously Mr. Reade is very serious about pursuing this case against the department. We’ll see what happens.