Well, no that’s not quite right. Headache would imply that County Clerk Tom Daly cares he blew $2,100,000 of public money on a real estate venture and that it could cost another $7,600,000 to fix the problem; or that he is in any way worried about it. And why should he be? When there’s no accountability you never even have to say you’re sorry.

Here’s the background. In 2007 Daly urged the purchase of the small office building at 433 West Civic Center Drive, in Santa Ana. The ostensible purpose of this acquisition was the expansion of the County Archives. Negotiations were approved by the Board of Supervisors in September, 2007. After several months of dickering and alleged property inspections, the County CEO and RDMD staff recommended that the Board of Supervisors approve the purchase for $2.1 million. Staff recommended an “as-is purchase” with the caveat that the County Clerk would be paying for “minor repairs” and interior improvements; they noted blithely that the purchase price was below their appraised value for the building. Nothing was mentioned about inadequate space or building deficiencies. In fact the staff report claimed the building had been well-maintained. 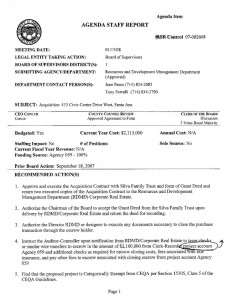 An almost comical selling point was an alleged annual savings of $26,000 for parking paid by the County to private parking vendors. No one seemed to calculate the lost opportunity costs or even the interest value of $2,100,000.

The Board voted 3-0 to approve the purchase in January, 2008. Norby, Moorlach and Nguyen put their fingerprints on the deal.

Two years later the building still sits empty across the street from Daly’s office.  And the archives still sit where ever it is they sit, presumably more crowded than ever.

What happened? Could it be that the County Clerk is now wrestling with the embarrassment of how to deal with a massive boondoggle?

In other words, the building is practically worthless; and plus demolition and paving costs, the County is now the proud owner of a $2,100,000 parking lot for a few dozen cars.

How and when did this painful realization occur? We’re not real sure about the chronology, but sometime in 2008 Daly hired a firm called Kishimoto Architects to look at the building and produce a feasibility report, after the building was purchased, with cost estimates for various alternatives.  The report, dated January 12,2009, proposed 3 approaches: 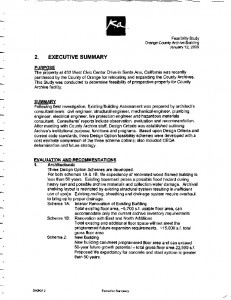 Say what? $2.8 million to remodel a $2.1 million dollar building?! Option two – that included a remodel and expansion – seems highly unlikely given the price tag, the schedule delays and the embarrassing admission that nobody ever bothered to do a space/needs assessment in the first place. And of course #3 was even worse: starting over would jack the price up to nearly $10,000,000, and add years onto any occupancy schedule.

So there the building sits.

Is any of this really Daly’s fault? His few remaining adherents will argue that poor Tom was just the victim of staff incompetence. Blaming the staff that recommended that this turkey proceed is easy because they were obviously derelict in their appraisal and physical assessment of the property. And the two remaining supervisors who voted for this (Moorlach and Nguyen) have a responsibility to the taxpayers to answer for their employees and the waste of over $2,000,000; after all, they are “Supervisors.”

But ultimately Tom Daly is the chief architect of this fiasco, and to those who know how elected politicians apply pressure to the staff to get the recommendations they want, there can be little doubt that the County Clerk was likely pressing and probably pressing hard for his imperial expansion. The money had been budgeted and needed to be spent. So the staff either intentionally looked the other way or didn’t bother looking at all. In the final analysis Daly is an elected official and answerable to the voters.

It’s hard to say what will happen to this real estate jewel. It’s too expensive to knock down and too deficient to use. The site is too small to do much of anything with. In other words it’s a real headache. And it’s all ours.