It was just announced that Pam Keller will soon be attending the “37th Anniversary Roe v. Wade Celebration” in Newport Beach. There she will join OC’s other liberal ladies such as Loretta Sanchez, Beth Krom and Rose Espinoza to relish in their legal ability to terminate the life of an unwanted human being. 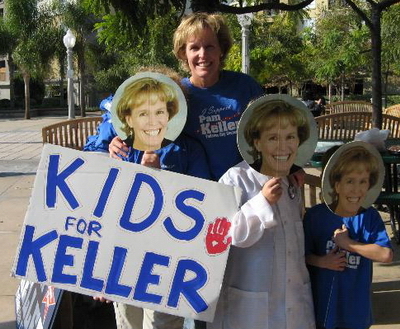 Amongst her close political allies, the right to abort a fetus probably represents some kind of crowning achievement in the exhausted fight for women’s liberation.

But to many in conservative Orange County, abortion is the ultimate violation of human rights against a living being. In fact, many of the sleepy voters who voted for the smiling school teacher in the last election might find the conspicuous “celebration” of this act highly offensive.

The other day I got wind that something called NUFF was holding a forum involving 4th District Supervisor candidates. What’s that you say? You have never ever heard of NUFF? I googled NUFF and got the National Uterine Fibroids Foundation. Then I added the word “Fullerton;” success! Neighbors United For Fullerton.

Turns out the group is a left-leaning tribe of Fullerton Observer adherents, and they are sponsoring a Supervisorial forum next Monday night at 6:45 at the Fullerton Main Library. Shawn Nelson, Tom Daly, Rose Espinosa, Lorri Galloway and Harry Sidhu have been invited by the NUFFsters. The latter two may need directions from their brand-new abodes in flat-lands Anaheim if in fact they have actually relocated their bodies, and not just their voter registration, to run for 4th Distrct County Supervisor.

The Register’s Jennifer Muir is slated to be the moderator, and a drearier job I can’t imagine. I wonder if she’ll bring up the carpetbagging issue. Let’s hope so.

Anyway, the forum could be great fun as voters plumb the depths of these candidates’ ignorance of County matters. Hell, Galloway can’t even figure out how to check with her own Planning Department to resolve an Anaheim zoning question!

END_OF_DOCUMENT_TOKEN_TO_BE_REPLACED
Posted onDecember 1, 2009December 28, 2009Chris Norby
by Mr. Peabody6 Comments on So Who Does The Red Bottom Blog Support in the 4th Supervisorial Race?

Way back in March 4th District County Supervisor candidate Tom Daly announced that Sharon Quirk and Pam Keller were invitees to his annual fundraiser. We wondered aloud how come Fullerton’s two liberal ladies would be hitching their wagons to this generally faded star given the fact that Anaheim’s Lorri Galloway was rumored to be giving thought to running here. We felt they might be shortchanging an up and coming female politician.

Since then we have learned that Galloway has indeed claimed that she is running and is determined to grab Daly’s endorsements.  Mercy! A dynamic, liberal woman politician in Orange County! Why, you’d think the heavens themselves had opened up and celestial music was playing.  But apparently Galloway will now have to work to swipe Quirk and Keller. According to a  press release that went out the other day these two worthies have given Daly their official endorsements. So has Art Brown, of Buena Park.

These endorsements of Quirk and Keller are clearly intended as a slap at Fullerton’s own Shawn Nelson, their council colleague who is also running; but not unexpected given Nelson’s independence and intelligence, and their lack of same. On the other hand Nelson is a Republican and they are Democrats, so what the Hell. Still, it seems they are giving short shrift to Galloway and even Rosie Whatshername from La Habra.

We can just skip over the endorsement Art Brown, the bearded, antiquated, and brain-dead  Mayor of  Buena Park who has never met a bureaucrat he didn’t like. But here’s a quote from our own blog-hating Pam Keller:

“I know Tom Daly will be a great Supervisor.  He’ll help our families by making the County an active partner with the communities of the 4th District,” said Fullerton Councilwoman Pam Keller.

Families. Community. Partner. Whatever this blather means, we know what it doesn’t mean. It doesn’t mean accountability and fiscal conservatism. It probably means boohoo liberal social spending with no one responsible. But we’re just guessing. Here’s one from Sharon Quirk:

“I am proud to support Tom Daly to be Fullerton’s next representative on the County Board of Supervisors,” declared Councilwoman Sharon Quirk.  “The people of Fullerton can count on him to listen to our concerns and deliver results for our community.”

Ah, more “community” nonsense. Can’t these gals ever say anything intelligent or insightful? No. This is just outfall from a lifetime of indoctrination in empty Dem-speak. It means Daly will retroactively spike employee pensions if he gets the chance.

The release also includes some pearls from Daly himself that will be the subject of a follow up post as we try to discover anything intelligent in them. When and if he ever creates a campaign website we will be sure to harvest it for fun stuff to share with the Friends.

END_OF_DOCUMENT_TOKEN_TO_BE_REPLACED
Posted onApril 28, 2009December 28, 2009OC's Fourth District
by The Fullerton Harpoon15 Comments on Will Rosie Run? Or is It Just Bad Posturing?

Is La Habra city councilwoman Rose Espinosa going to run for County Supervisor? Apparently she has made an “intent to run” filing – the first step in the campaign process. At this early junture it may be too soon to tell if she is serious or merely posturing – going for a deal with County Dems and union honchos.

Her entry into the 4th District fray in 2010 to replace our Sopoforic Supervisor would certainly have an impact. As a liberal Democrat she would immediately cut into Tom Daly’s base, especially in blue collar La Habra. She might even be able to attract more militant union support (although it didn’t do her any good against Norby in 2006). Daly certainly can’t be happy about any of this, especially if Lori Galloway were to get in as well. We still wonder cyber-aloud whether or not Pam Keller and Sharon Quirk may not have experienced premature endorsolation with Daly – showing up at his coming out party, and all.

All of this seems like excellent news for Fullerton’s own Shawn Nelson. A split Democratic vote means that  the Dems will end up going after each other – not him in the primary, and, who knows, a solid Republican candidacy might get 50% +1.