Skip to content
Posted onMay 19, 2010Behind Closed Doors
by Grover Cleveland27 Comments on A Tale of Two Toms 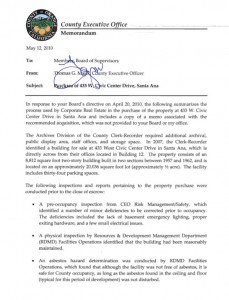 Was it fraud, negligence, incompetence or just an honest to goodness mistake when Tom Daly approached the Board of Supervisors and asked for $2.1 million to purchase a dilapidated building 433 W. Civic Center Drive?

Did Daly forget to tell the Supes that the building was a tear down and not in turnkey condition? Or did he actually believe that the building was ready to move into?  If he did then he needs to fire his real estate agent! There are many hard questions that remain to be asked and answered.

At Tuesday’s board meeting, Supervisor John Moorlach asked County CEO Tom Mauk to bring back a report detailing what happened to the missing information on the useless multi-million dollar building.  Was it lost or intentionally withheld? Did Tom Daly just forget to tell the Board the complete facts about the money-sucking building, knowing that they would have said “HELL NO!” when they found out that it would cost another $7.6 million to make it suitable for the archives and the Orange County Sports Hall of Fame?

Let’s not forget the Sports Hall of Fame was being “brainstormed” by Daly’s BFF Brett Barbre to the tune of another $48,000.

So back to the word “fraud.” What does it mean and how is it really pronounced?

1. deceit, trickery, sharp practice, or breach of confidence, perpetrated for profit or to gain some unfair or dishonest advantage.