The report summarizes the $3,000,000 spent on overtime last year, listing the top 102 overtime earners (view the Register’s list). Among them, a paramedic named Timothy Hartinger worked the most overtime in 2009 with 1,160 hours at time and a half pay, bringing his total earnings to a glorious $138,117.

Notably, these wage figures do not include an additional 33% in pension contributions or thousands of dollars in health insurance premiums for public safety union members. 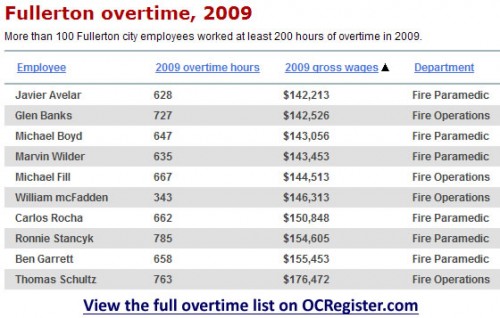 Naturally, the overcompensated fire and police union members came up at the top of the list and made their best efforts to deflect criticism with emotional falsities. One fireman played the classic union card, repeating the claim that he would die 10 years earlier because his job is so dangerous. Nice try pal, but CalPERS actuarials have proven that public safety employees live just as long as everybody else.

FFFF favorite Jack Dean made his way into the report, saying “Considering the unemployment situation, it doesn’t appear to be right that there’s so much overtime when so many people are unemployed,” concluding “there appears to be something wrong with this structure.” Something wrong, indeed.

Even the city manager got in on the fun when asked about minimum staffing for firefighters, which significantly boosts their expensive overtime pay. “The provision is there because of the union. If I had my preference, I’d do away with it, but it’s sacred to the firefighters,” said Chris Meyer.

We’ve been hard on Register reporter Adam Townsend in the past, but it’s great to see that there’s still some life left in the Register’s local coverage. It takes a little bit of courage to rock the boat of public safety employees, and hopefully we’ll see more of this in the future.

It’s been a couple of months since The Fullerton Savage’s debut on this blog drew over sixty responses to the story of a new sex oriented shop in downtown Fullerton.  Now the Register has gotten into the act with a story about the same subject.  Adam Townsend, the author, and many commenters on this blog seem to think I had something inherently against the business in question.  This is what Mr. Townsend wrote:

‘The author called the shop’s merchandise “trash.” ‘The blog said that seeing the underwear-clad mannequins and other sexually-oriented merchandise would harm children and said allowing the business to operate was “engendering blight.’

To be fair, I did use the word “trash”, but trashy isn’t the worst thing to associate with lingerie.  I never wrote that the sight of the busty mannequins etc. would “harm children.”  I did write that they would get “quite an education” from looking into the shop’s windows.  Remember, we are The Education City!

So maybe Adam Townsend got the wrong idea about my attitude toward a sex-themed business.  No big deal, but where he really blew it in his article was when he wrote that I ‘said allowing the business to operate was “engendering blight.”‘

No, Mr. Townsend, what I asked was “Is there any better evidence of redevelopment engendering blight?”  This is no small distinction.  Shops like The Naughty Teddy are sometimes cited as examples of blight when cities are trying to establish redevelopment zones.  Downtown Fullerton has been a redevelopment zone since 1973.  My point, Mr. Townsend, was that despite nearly forty years and millions of dollars spent to push out pawn shops, lure in restaurants, add trees, build signs, commission murals, rehab storefronts, brick street medians, redesign traffic signals, build mixed use developments, and whatever else The Redevelopment Agency unilaterally decides is good for the area, in the end a 5,000 square foot shop that sells lubricants, videos and sex toys to the 21-and-over only crowd is open for business near a major intersection downtown.

Well, just for the record, I don’t really care what consenting adults do for sex and I don’t care what a business sells, as long as both are safe.  But if a city spends millions of taxpayer dollars trying to turn a downtown into restaurant Disneyland or whatever it is they are trying to do with it, I would really like to know how The Naughty Teddy fits into their vision for the whole place.

Did the business lie on their application to the city, as has been claimed, or are they the victims of a prudish municipal mindset?  I don’t know.  Several tattoo parlors have already opened downtown, and the city is right behind that curve.  Look for an agenda item concerning the classification of tattoo parlors on the next council meeting agenda.

Okay, now that I have your undivided attention, I’d like to share the contents of an e-mail we just got. It’s about  a store in downtown Fullerton called “The Naughty Teddy” that opened up in what used to be a pawn shop on Commonwealth.

The Fullerton Savage wrote a post about this back in April, and it seems that the Fullerton News Tribune’s intrepid Adam Townsend just got around to doing a piece about the issue that cites FFFF. Two months late. Not bad for the mainstream media.

Anyhow, here’s what the e-mail said:

Just read the article on the OC Register about the Downtown Fullerton store,The Naugthy Teddy and your opinion of it. That store is not trash, this Website is Trash. You need to get a grip. Its not their fault you are sexually repressed. I would not be suprised in a couple of years the people who run this site will be caught having a gay extra-marital affair or end up drunk at a ditch with a dildo up your ass, just like the countless of conservative politicians who preach to repress other people’s sexual freedoms. You make sick. Grow up.

Now if this individual had bothered to read the actual post he/she would be well aware that some of our posters and regs did not agree with the Savage; if they were familiar with our blog he/she would know that each of us is perfectly free to write about whatever we want and non of us speaks for any other FFFFsters.

As to whether any of us are sexually repressed, I can only speak for myself and say that my wife says no. I may indeed end up in a ditch, but I’m pretty sure my lower alimentary canal will be free of foreign objects. 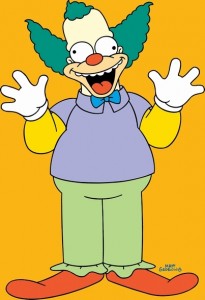