Who is Jesse La Tour? I have no idea. But he is the first candidate to throw a bone to Fullerton’s poultry-loving voters.

A cursory search of the new Fullerton city council candidates revealed the blog of La Tour, who is bent on discovering the secrets of the culinary curiosities known as “chicken fingers.”

On his blog, Jesse journals his journey to five Fullerton eateries, tasting varieties of fried fingers at places like Bill’s Burgers, Stadium Tavern and the Cajun Swamp.

“I love chicken strips. They are delicious,” writes La Tour, who began his quest at Roadside Burgers where he observantly declared that the nuggets probably came in a frozen bag. His suspicions were heightened later when he discovered that the fingers of Bill’s Burgers a few blocks away were almost identical. Both eateries earned a 6 out of 10 on La Tour’s scorecard.

So who won? After five plates of simulated poultry appendages, Jesse La Tour finally declares that the best Fullerton fingers can be found at The Pint House in downtown. “These strips are made from scratch, hand-dipped in beer batter and fried to perfection, so they are crisp on the outside and juicy in the middle,” he writes. Sounds tasty.

In all seriousness, the lineup for Fullerton’s city council races are nearly complete. Today is the day when FFFF begins combing through the histories of each candidate, distilling fact from fiction and shining light on everything they hoped you would never find out. Despite what you may hear from those who prefer to keep their heads in the sand, this process is not about negativity, personalities or vendettas. This is about the truth, our choices, and ultimately, our future.

The two-race situation has generated plenty of speculation as to which candidates will face each other for the separate seats. With Bruce being one of the strongest contenders, this action may solidify the choices of other candidates.

Bruce’s campaign is having a kickoff party this weekend. Contact the campaign at [email protected] for details.

Update: Three more have been added to the list. 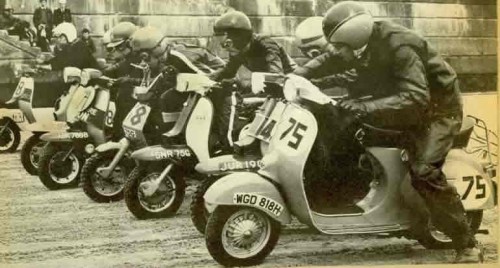 The following have pulled papers to run for city council so far:

One of our own FFFF bloggers has announced his candidacy for Fullerton city council. Greg Sebourn, a professional land surveyor, pulled nomination papers at city hall on Wednesday afternoon. 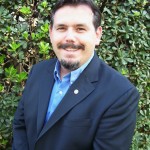 Greg says he represents fresh leadership in Fullerton and will focus on core city issues such as restoring infrastructure, improving public safety and enhancing customer service at City Hall.

Here’s a little more about Greg:

Greg Sebourn is the Senior Survey Project Manager at Johnson-Frank and Associates, Inc. of Anaheim Hills. Greg has been instrumental on projects that include the subdivision of Anaheim Stadium to make room for an NFL expansion team, U.S. border properties and rights-of-way acquisition, several National Forest boundary projects, and numerous smaller municipal projects.

Additionally, Sebourn is the Facilitator of the Survey/Mapping Science Program at Santiago Canyon College, the largest program of its type in the continental United States as well as a distinguished adjunct-faculty.

Greg currently sits on the City of Fullerton’s Citizens’ Infrastructure Review Committee with broad knowledge on the challenges for Fullerton.

Given the current crop of candidates, it’s safe to say that Bruce is an early favorite. He’s likely to get the endorsements of both Supervisor Shawn Nelson and Assemblyman Chris Norby, along with the GOP endorsement.

Why? Because Whitaker has a long history as a successful tax fighter and a proponent of property rights and personal freedom.

And now on to the chronicles of Bruce Whitaker:

After the Orange County bankruptcy, Bruce Whitaker debated against tax proponents and authored numerous guest editorials which helped defeat a bankruptcy sales tax in 1995, resulting in more than $2.2 billion in taxpayer savings.

Bruce is currently the O.C. District Director for Assemblyman Chris Norby and serves as a member of the Fullerton Planning Commission.

END_OF_DOCUMENT_TOKEN_TO_BE_REPLACED
Posted onJuly 12, 2010July 11, 2010Dead heads
by admin10 Comments on Who Should Pay To Clean Up The Mess in Downtown Fullerton?

Surely not the businesses that don’t sell booze.

Last year a few downtown Fullerton property and business owners lobbied the City Council to impose an tax assessment on downtown Fullerton. The purpose of this “Business Improvement District” was to raise money to clean up the mess introduced into Downtown by the numerous booze joints and illegal dance clubs.

The first step was predictable: hire yourself a “consultant” who will tell you what you want to hear. But the price tag was too steep and the promoters couldn’t get a clear majority of the Council to go along.

But apparently now Councilwoman Sharon Quirk-Silva has changed her mind about hiring a consultant to meet and greet and spread the BID propaganda.

The direction here is all too clear: build up some momentum toward the idea and then rely on the self-interested parties to vote their interest and hope that the other property owners don’t catch on.

Well I think this stinks. Why should all the downtown property owners pay to fix the problems caused by the bar owners and their out-of-control customers, not to mention a City policy that has enabled all these problems? And let’s not forget – former police chief and council candidate Patrick McKinley who liked to look the other way.

And why should the taxpayers keep footing the bill?

What valuable piece of manpower is worth paying over $200,000 per annum not to do anything?

If you guessed former Fullerton Police Chief Patrick McKinley you’d be right on the money. If there was ever a poster boy for out of control police pensions it would be Chief McKinley. See, the big guy pulls down a cool $96K a year from his old job at the LAPD that he’s been collecting since he left 17 years ago; then there’s the $118,000 he now rakes in from CalPERS, presumably from his time as Fullerton’s top cop. 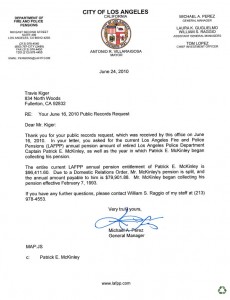 Why is this important, apart from the obvious illustration of public safety pensions run amok? Because the word on Commonwealth Avenue is that Mr. McKinley is being promoted for City Council appointment to replace Shawn Nelson by Don Bankhead and Dick Jones – two other public pensioneers, one of whom is also a former cop.

In the RINO world of Bankhead and Jones this sort of thing is just hunky-dory. But for a lot of people – liberals and conservatives alike, the thought of this massive double dipper making pension decisions that affect Fullerton taxpayers is reminiscent of the fox guarding the hen house.

And of course we also remember McKinley as the police vest carney and vocal backer of the hideous Linda Ackerwoman creature.

Check out this video from Marty Burbank’s Fullerton City Council campaign and be sure to let us know what you think about it.

END_OF_DOCUMENT_TOKEN_TO_BE_REPLACED
Posted onJune 17, 2010June 23, 2010About Us
by admin7 Comments on Some Questions For Potential Fullerton City Council Candidates

There will be 3 open seats (and maybe 4) for Fullerton’s city council this November.

For those that are interested or considering running for any one of those seats, our Friends would really like to know your opinion about the following issues:

2. What’s your opinion on the roll the city manager plays with the city council?

3. What is your opinion about public employee pensions?

4. What is your opinion about holding people accountable for their actions?

5. What is your opinion about Zone changes and General Plan Amendments; are they ever justified and if so, why and when?

6. What is your opinion on the High Speed Rail coming through Fullerton?

7. What is your opinion about the way things are going in Downtown Fullerton?

8. What is your opinion about the proposed Fox Block development?

9. What is you opinion on future development in West Coyote hills?

Now that Shawn Nelson is moving up to the Supervisor’s office, his imminent departure creates an even more unpredictable Fullerton City Council campaign landscape.

Pam Keller has already announced that she’s out. With Nelson gone that means there will be two openings, plus the interminable candidacy of the antediluvian Don Bankhead.

It’s hard to believe that the four remaining councilmembers could decide on a replacement for Nelson, so the prospect of a rump council (okay that’s pretty funny if you think about it) and a November election to fill the remainder of Nelson’s term seems inevitable.

Then, of course, there’s the sad deterioration of Doc Jones, whose antics and idiocies continue to mount. Re-elected in 2008, there has been speculation that he would hold on for two years and then quit when a suitable Ackerman/Royce Chamber of Commerce zombie could be coughed up.

Could there be yet another seat up for grabs, come November?

It’s already getting late in the year so the interested and the ambitious must surely be contemplating their political futures today.

Good luck to them, with a caveat. The ones whose ambitions outweigh their brains will be scrutinized closely. By us.