Skip to content
Posted onNovember 4, 2009December 28, 2009Arts & Architecture
by The Fullerton Harpoon40 Comments on Some History Behind Architectural Veneers

We’ve made a pretty big deal on this blog about the use of brick veneer, specifically, the way our Redevelopment Agency has always insisted on slathering it on to stuff to try to give the false appearance of historic structure, or under the guise of matching what is supposed to be the building material par excellence of downtown Fullerton: red brick.

We thought it was about time to get an historical perspective on the uses of architectural veneer – particularly masonry veneer, and so we have once again called upon the good offices of Dr. Ralph E. Haldemann, Professor or Art History (Emeritus) at Otterbein College, and our adjunct Arts and Architecture Editor. Doc?

The question of the role of veneers in architectural history is really quite fascinating, but requires an amount (admittedly minimal) of erudition. I will try to sum up some thoughts on the subject.

In pre-modern times the nature of building materials basically necessitated that structural materials were de facto finished materials as well – although historical exceptions are not uncommon: we know of course, that the Romans during the Imperial Era were fond of using stone veneers on brick buildings to dress them up. Such uses of marble veneer were often used in the Western Mediterranean basin countries in Romanesque and Italian/Venetian Gothic buildings.

The use of plaster cement or lime-based coatings on brick, especially non-fired brick, has an ancient lineage that reaches forward into the adobe buildings of California’s own Mission period; however neither this application nor the modern use of lath and plaster on studs can be considered a veneer.

Medieval Europe, particularly in the  non-deforested climes of the north, saw a rise in timber construction in which the structural members were exposed and the interstitial areas filled with plastered wattling. Again, such fill even though non-structural, cannot rightly be called a veneer.

With the advent of structural iron and steel, fill materials in modern commercial architecture remained brick (for practical and fireproofing reasons). However, terra cotta facings with ceramic finishes attached to the underlying structure became the norm from the 1890s through the 1920s; the wide adoption of moderne styles in the 20s and 30s often replaced highly detailed terra cotta with simpler and smoother concrete and even ceramic tile finishes. These uses generally applied a finished masonry surface over an unfinished substrate of common brick. These are veneers.

It was really in American domestic architecture that brick veneers (almost exclusively brick) captured the imagination of a growing bourgeois sensibility. After the industrial age had ushered in standardized lumber, machine made nails and mass produced balloon-frame wood houses, a longing for the perceived hominess and historicity of brick set in. This was aided by several cultural American Colonial Revivals, particularly in the early 20th Century that coincided nicely with eras of vast suburban expansion. It was all mostly a real eastate come-on.

The use of phony brick surfaces continued unabated in the little cracker box houses of the ’50s and persists happily to this very day, particularly in subdivisions where an emotional attachment to American historical antecedents is being peddled.

The use of fake brick fronts in commercial areas followed the same suburban trajectory as the use of the material in domiciles. It too persits today, particularly where city fathers and chambers of commerce wish to deal out a conjured up historical image for their otherwise unremarkable and humble burgs.

Modern architectural theory held that this sort of use of non-structural masonry veneer is fundamentally non-truthful, meretricious and basically a middlebrow (or lower) affectation. And so it is!  And yet the Robert Venturi school of Post-Modernists embraced such use for its exuberance, color and tactile properties, as well as potential (often ironical) historical connotations. However it must be said that when the historical connotation is wrong, or the deployment is meant to be deceptive or even slavish, a real aestheic problem exists; and can, if left uncontrolled, lead to real civic embarrassment.

Remember those horror movies when the outraged villagers grabbed their pitchforks to have at the monster? What the “Fox Village” monster could use are a few more angry villagers.

At the City Council “workshop” on Tuesday the new plans for the existing city-created empty space behind the Fox Theater were rolled out. And while the reception by the public wasn’t pretty it wasn’t enough to kill off the monster, either.

What was rolled out were several elevations that raised the curtain on a hideously confused jumble of themes and materials that were supposed to be modernish, but that had that certain flavor of architectural renderings done by crazy people.

A hodgepodge of shapes and veneers with no apparent cohesion and not a whiff of aesthetic originality. Stone veneer on the first floor obligatory.

Have Fox Villagers gone insane? What a mish mash!

Why are they still trying to move McDonald’s? Didn’t the Council put that idea to rest? And yet here it is again! Can anyone say “insubordination”? Guess not – in Fullerton! And look a parking lot on the corner. Just what downtown needs – another permanent hole in the building fabric of downtown Fullerton.

Ah, the inevitable “pedestrian paseo.” Just lookit all the happy, bedazzled consumers. And that fountain! Precious. Makes you want to make a wish and toss three coins in.

Folks if you aren’t ready to go grab your pitchforks by now, we suggest that we stick a fork in you –  because we think you’re done.

On Tuesday our City Council took up the matter of the proposed parking structure on Santa Fe. Since we first reported on this issue City Staff has maintained its ludicrous attachment to the brick veneer panels, and its equally ludicrous position that fake brick somehow satisfies some sort of CEQA requirement – even though WE HAVE COMPLETELY DEMOLISHED THE MYTH OF BRICK AND REALITY OF BRICK VENEER IN DOWNTOWN FULLERTON.

Such a lame approach insults not only our aesthetic sensibilities, but it also turns the whole environmental review process into a pantomime that just provides staff cover for what it really wants: fake brick. 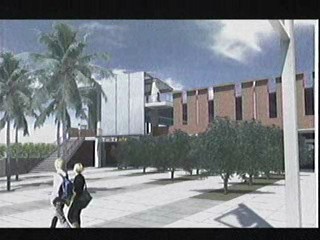 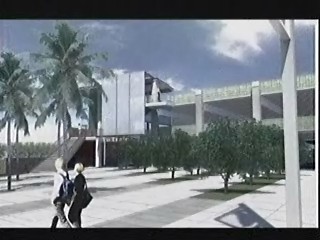 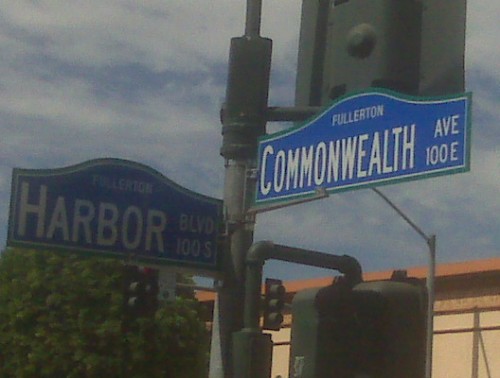 The first thing that came to my mind when I first saw these street signs was: am I the only one that thinks these things look like something I might find at Knotts Berry Farm or the dopey French Quarter at Disneyland?

There is something odd about the idea that a street sign needs to be treated as an “aesthetic” object – meaning that it is subject to the whims of visual preference among some class of people self-appointed to pass judgement on such things. A street sign is a street sign. The first necessity is functionality. Can it be read easily, and read at night? Is is affordable? After all, the taxpayer is footing the bill, rarely the individual who makes the “design” choice.

But there is something more subtle and just as pernicious as mistaking a utilitarian object for an artistic one. And that is the application of boneheaded and embarrassing aesthetic choices. We have already illustrated the confused thinking behind the aesthetic viewpoint that prefers the curved to the straight line, the complicated over the simple. Remember this post on Fullerton’s goofy redevelopment sidewalks?

And in our numerous posts that have railed against fake old we have also criticized the bureaucratic bad taste that adores the hideous old-timey themes so prevalent in insecure places like Fullerton. Who knows why there is a hump on the top of these signs? Is it something someone saw somewhere? Something picked at random out of a street sign catalogue by a traffic engineer? Are we supposed to discern an echo of the Mission Revival espadana in the hump – like those disgusting Taco Bell outlets of the 80s? Who cares?

This is just another example of confusion: confusion that a street sign needs to be gussied up; confusion that a hump on top is better than a simple rectangle; and confusion that the inclusion of the almost illegibly dinky word “Fullerton” somehow adds something to the ensemble.

Say, whatever happened to that Country Bear Jamboree?