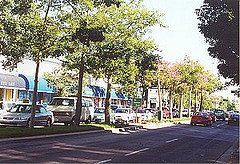 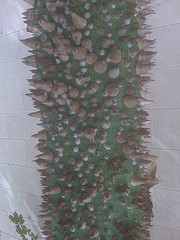 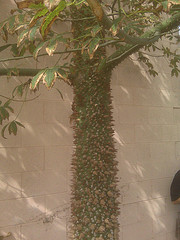 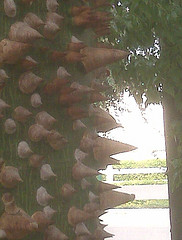 Why did I (and many others) advocate the removal of the Silk Floss trees in downtown Fullerton? Damaged and dangerous sidewalks for one thing. And slimy-skinned, scrotum-shaped pod bombs, giant wafting cotton swabs, and naked spike armored monstrosities, depending on the season, for another. And let’s not forget the blocked architectural elevations, signage, etc.

About ten years ago the City started removing a few of the worst offending silk flossers and replacing them with some other brand of tree. Of course they plopped the new ones right back in the same holes as before – rather than plant them at property lines where they wouldn’t block architectural elevations and business signs so badly.

And of course it never occurred to the clever folks in Redevelopment that these trees, wedged into the narrow sidewalk space would never develop proper crowns and generally look like wretched half-trees.

Now that the big Harbor Boulevard redesign (you know the one that killed on-street parking, created a traffic tunnel, and doomed regularly functioning storefronts) is nearing its 30th birthday it seems like a good time to readdress the mess that Redevelopment has caused on Harbor and talk about a different model.