Skip to content
Posted onOctober 9, 2012A Step in the Right Direction
by Grover Cleveland88 Comments on Two Signs, Two Messages

Accountability versus setting the bar low and keeping it there. 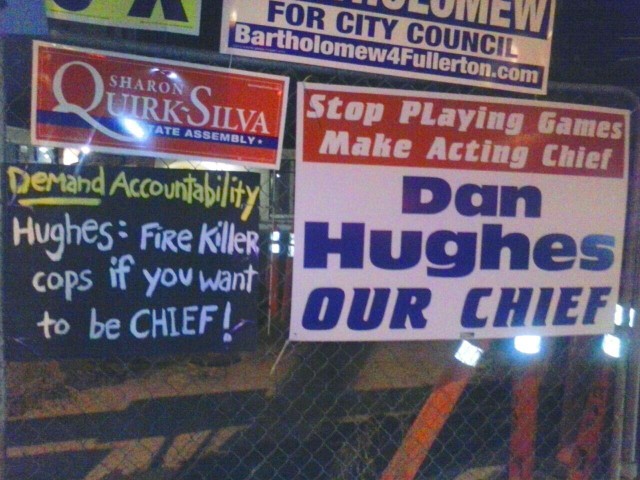 Hughes has made his deal with the devil: do as little as possible, stonewall, continue to let the gang run amok.

No doubt he has his claque among the old Guard that fights change tooth and nail and will do almost anything to avoid responsibility and accountability.

Where do you stand? 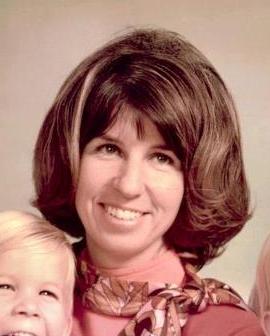 See, her vision of a know-it-all government, whose “expertise” the citizenry is obliged to (shut up and) obey was much more prevalent then. But a decade of suffocating inflation, ever-escalating taxes and ballooning interest rates got people thinking about things.

By the time Mrs. Flory was first elected to the Fullerton City Council in 1994, the world had changed a lot, although she hardly knew it. And by the time she was fired by the voters, in 2002, she was as obsolete as the horse and buggy.

You need only observe her behavior during the past year to witness a mind soaked in a nasty vindictiveness as her “esteemed” idols, the Three Bald Tires, were driven from office themselves for incompetence and dereliction.

I’ll tell you where Flory was. She was snuggling up to the Three Hollow Logs in their secret sound-proof bunker. 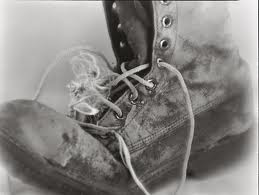 If Mrs. Flory thinks posting her mindless musings on a Facebook page means that she is in any way more useful than a lost shoe, she has another think coming.

And we’re not going to give Fullerton back to the decrepit mind-set of Flory, Jones, Bankhead and McPension and their incompetent, arrogant ilk.

Over at the Save Our Culture of Corruption website, the FPOA shares this rather interesting tidbit:

Last year, the Fullerton Police Officers Association along with City Employees and the Firefighters Associations agreed to cost savings, pension reform and more cuts, which totaled $1,065,000 per year in real dollars for Fullerton taxpayers and the City! (Italics added)

Now I have absolutely no idea what this means, or where that number comes from. It doesn’t matter. It was meant to look impressive and impress the masses with all the sacrifices and cost savings our wonderful police have made. You are supposed to glide over the fact that the number (whatever it means) includes all union employees in Fullerton, but that doesn’t matter much, either. As the lawyers say, I’ll stipulate that it’s a meaningful figure and not just some chunk of stray pastrami that fell out of Barry Coffman’s mustache.

And now for context, let us consult the City’s Annual Budget and contemplate that number in relationship to total projected City expenditures for FY 2011-12.

On page A-21 we note that the total General Fund expenditures will be $71,784,315. Do the math. Divide the alleged savings of $1,065,000 by that total and you get a pipsqueak 1.5%, and only a fraction of that attributable to the rank and file cops themselves. 1.5%. Feeling rosy yet? But it gets even more comical.

On page A-28 you will see that the total projected City expenditures from all sources, including the grants that pay for cop overtime, is a $178,800,088. Do the math, again. Now the percentage of alleged sacrifice compared to the total cost to run the City shrinks to a minuscule .6%. That’s 6/10ths of one percent, Pythagoras, even if the number is legit.

Wow, what a sacrifice!

If you didn’t know any better you might credit the FPOA for their heartfelt concern for the taxpayers who employ them.

We are in receipt of a letter to the Fullerton City Council from a potential candidate named Jennifer Fitzgerald. This individual supported the Three Bald Tires in the recent Recall, but seems to have seen the light with regard to exploring all opportunities to provide cost effective services to the taxpayers and residents of Fullerton. 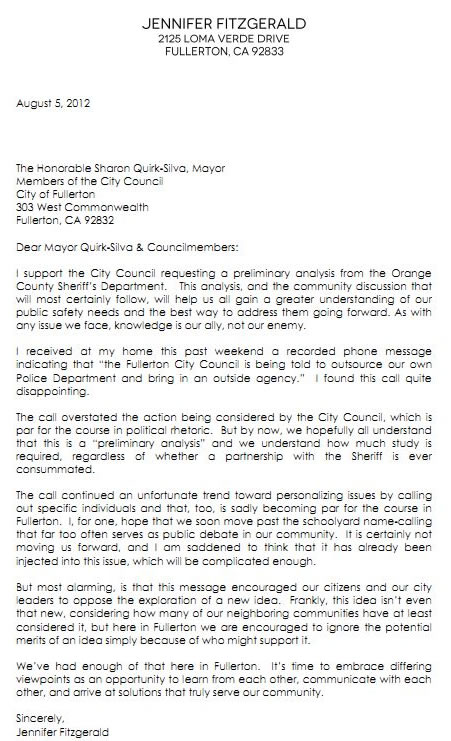 It remains to be seen what union spokesman “Dick” Ackerman will think about this missive, but hopefully this lady will show up to the council meeting to let him know.

Bottom Line: The advisor who rigged this year’s ASB election (and possibly those of earlier years—no way to know) remains on staff. The student who proved the wrongdoing—Jacob Bigham–was suspended, stripped of the Vice Presidency he legitimately won and banned from future ASB participation.

Since accessing the advisor’s database was the only way to prove fraud, why is he punished? Without his vigilance, how many future ASB elections would be rigged without anyone knowing?

If the whole purpose of student elections is to inculcate democratic values, what message does this send to students?

If an ASB advisor does not trust the electoral judgment of Troy High School students —ranked consistently among the nation’s highest performing—at what other schools are such elections routinely overruled without anyone knowing?

Is the sanctity of student elections protected by law? While the State Education Code is vague, the Elections Code is very specific in defining “election fraud” as applying it to “all elections.” No distinction is made. Just last spring, an arrest was made in a case of election in a student election at Cal State San Marcos.

The unilateral, secretive, intentional nullification of an election is as fundamental abuse of power as can be committed against democratic values. And exposing such an abuse is as high a service as a citizen can perform. Thank you, Jacob Bigham. You are one true Troy Warrior. 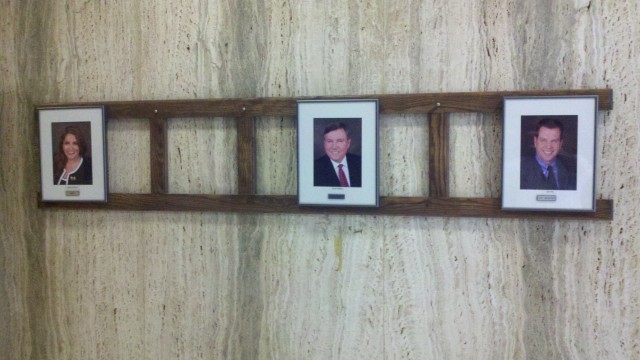 In a democracy the elected representatives work for the people. When they forget that, and when they come to affiliate themselves with the governing class, the results can be consequential. Sometimes it takes a while, but sooner or later their dereliction catches up to them.

The image above symbolizes freedom from tyranny – the tyranny of incompetent, entrenched, befuddled decrepitude.

Happy 4th of July, Fullerton. Have a cold one and congratulate yourselves!

Could be. Since July 2011 Recall candidate Doug Chaffee has been the invisible man. No presence at protests, no support of the Recall, no denunciation of the recall, no comment on the Culture of Corruption in the FPD, no defense of the McKinley police regime, either.

Some Democrats who supported Chaffee in 2010 are jumping ship – to independent candidate Matt Rowe. They are claiming that Chaffee is just a mealy-mouthed guy who wants to get elected without saying a damn thing substantive.

Here is a letter from Stephan and Noelle Baxter, and William Zdan sent to our friends at The Fullertonian. It’s a hard-hitting piece, born of the frustration of a politician who is so petrified of saying anything that he says nothing, and evidently stands for nothing.

The choice of Rowe over Doug Chaffee is the proverbial no-brainer. When you check out Chaffee’s supporters you’ll you’ll see the Old Guard Left like Molly McClanahan and Jan Flory who sat on their hands and kept their mouth shut in the wake of the Kelly Thomas murder. Many of his supporters actually oppose the recall and that speaks volumes about what they expect from their boy. He’s even being supported behind the scenes by repuglicans like Dick Ackerman and his sleazy ilk who apparently see in Chaffee their Main Chance. 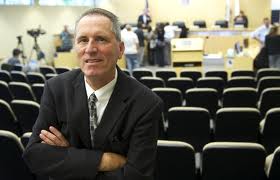 According to The OC Register, here, the outside “independent” investigative company hired by the City to look into the actions of the cops that beat Kelly Thomas to death last July has delivered its report on the incident. Unfortunately, nobody gets to see the report authored by Mr. Michael Gennaco except Acting Chief Dan Hughes – because it relates to police personnel matters. And, as everybody knows, those matters are shrouded in a veil of impenetrable secrecy. Just the way the police unions like it.

So we are left to guess at the contents of the report and left to guess whether or not our elected officials will be able to see it. Speaking of guesses, my guess would be no, except for Pat McKinley, of course, who seems to get special privileges when it comes to sticking his nose into personnel matters regarding the dubious characters he hired as former Police Chief.

The issues here are particularly interesting given the fact of the impending trial of Mssrs. Cicinelli and Ramos for manslaughter and murder, respectively. Negative findings could have an impact on that case. If, as many anticipate,  Mr. Gennaco tends to whitewash the case we can expect a comparatively speedy release of the report with some exculpitory headlines by Lou Ponsi.  Gennaco’s undernourished first report was more interesting for what it left out than for what it said,

Also lurking in the back of the room is the potentially costly civil trial and possible Civil Rights charges by the Feds. So if the report indicates that the cops acted way outside policy and procedure look for a protracted release of minimal information, or no release at all.

Y’all come on up the hill and watch a bunch of well-to-do cheapskates pry open their moth-infested wallets one last time for the Three Bald Tires.

While you’re there, don’t forget to tour the home of water boarder and notorious hotel junketeer (on your dime!)  Jim Blake, too. You spent $125 bucks for the privilege, you might as well look at his big screen TV, his Lazy Boy recliner and his fancy reproduction oil paintings. 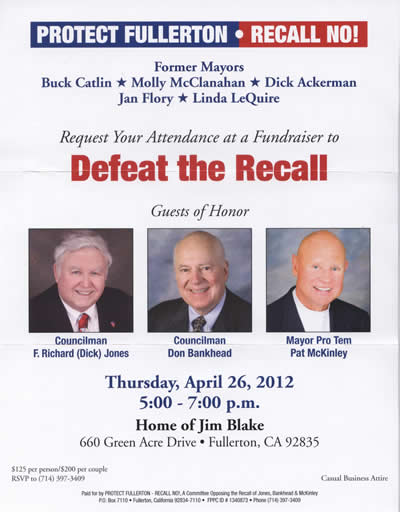 And speaking of the notorious Jim Blake, I’ll leave this for your perusal just to remind you of the moral caliber the anti-recall gang:

Here’s a fun image of the house of an anti-recaller who seems to want people to believe that Fullerton is not for sale. Whose abode is it? 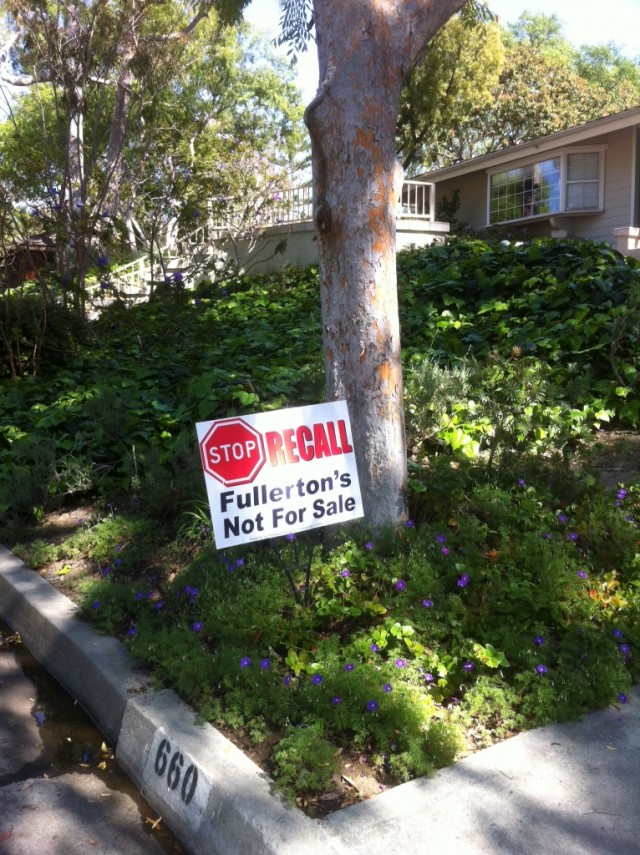 Why none other than Mr. Jim Blake, Fullerton’s Metropolitan Water District (MWD) Representative for Life, who was recently busted by a local news watchdog for his high living on the water rate payer’s dime. Blake also got some unwanted publicity from Teri Sforza at the Register for racking up huge travel bills a water junketeer. Blake has every reason to support the Three Hollow Logs, just as I’m sure they appreciate his ethical backing.

So there you have it folks: the Culture of Corruption in high dudgeon as it misrepresents itself to what it fervently hopes is an unsuspecting public.