So Fullerton has decided to publish the weekly records request log. Okay, it’s a public document so I don’t care about that and I’ve never been shy about my involvement in local politics.

But this newest document is just horseshit and screw the city bureaucrats for their disingenuous blame shifting.

Why the rage? Read the line items.

If the city didn’t hide everything and lie about what is released into the public domain there wouldn’t be a need for much “staff time” and/or “attorney cost”.

This request, for what should be public data, allegedly cost the city just shy of $100.

Here’s what was returned: 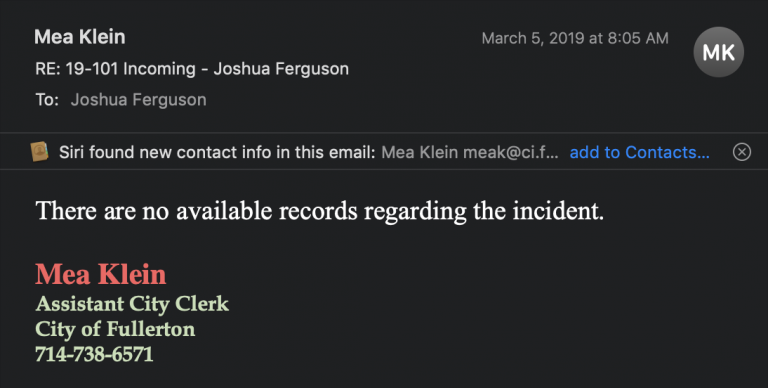 There. Are. No. Available. Records.

None. Nothing was returned. So the city called the attorney to go over what exactly?

This request was related to an accident where Parks employees wrecked a city vehicle. Since the date of that incident the city has buried the details without so much as saying a single word to the ratepayers who owned that vehicle. Not one word. Not one answer. No acknowledgement and no pretense of accountability.

So not only was the city not transparent to the people, which is the norm for these nitwits, they paid the attorney to double down and hide everything while returning zero records and admitting nothing.

This is just a line item to shame and blame the people who put in requests by pointing out the costs of transparency.

If the city is going to lie, obstruct, hide information and then try and shame us with bullshit costs I say bring it on. Let’s do this. I’m going to try and get the high score now. Who’s up to the challenge?

19 Replies to “Costs of Transparency”