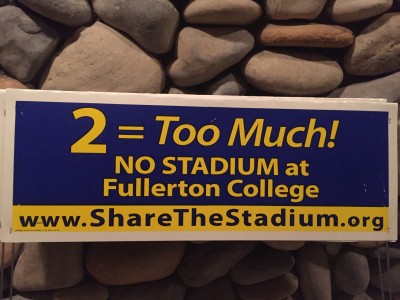 Regular readers know we have already covered the the proposed Fullerton College stadium in detail (see here, here and here). In a nutshell, the NOCCD Board of Trustees want to turn Sherbeck Field into a 4500 seat football stadium so the Hornets can play football in their own stadium instead of their current location, or the Fullerton High School stadium located less than three tenths of a mile away.

The residents around Princeton Circle have been fighting this boondoggle for awhile and appear to be getting organized. They have website, http://www.sharethestadium.org,  and are passing out campaign signs, to spread the word that the Sherbeck Field proposal is a costly and unnecessary boondoggle and should be scrapped.

Admittedly, they don’t hammer on my biggest objection to the stadium – the fact that the funds to build it only exist because the voters passed Measure J in 2014, based on the (since reneged) promise to improve the Veterans Centers on campus, but perhaps their approach will be more effective long term. Either way, this is a good sign that the Trustees have a  well deserved fight on their hands.

7 Replies to “Yes, two stadiums are too many”