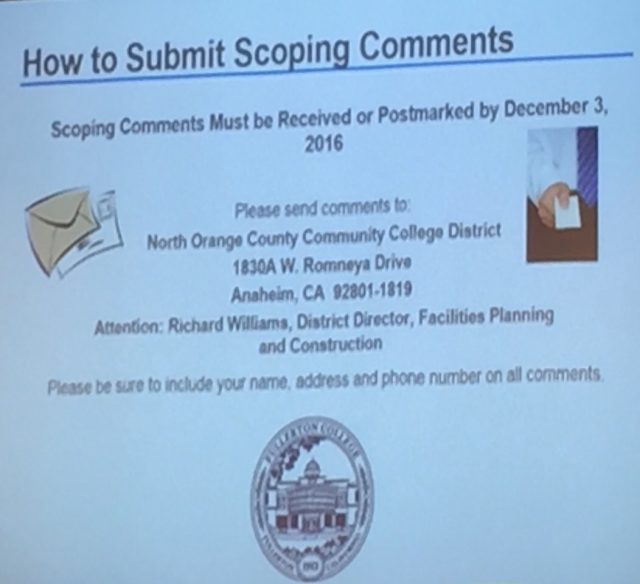 Fullerton College is going to ruin the nearby neighborhoods when they build the boondoggle that will be Sherbeck Stadium and they are going to use the fact that you residents didn’t yell at them as the very reason for building an unnecessary Stadium when there is already a High School stadium literally within walking distance of the College in a town with another already under-utilized stadium at C.S.U.F..

If you don’t want Fullerton College to go ahead with their plans you need to write a letter to them to tell them why you’re against it. You have until tomorrow, 03 December 2016, to get your letter postmarked & in the mail or they will ignore you and you’ll have nobody to blame but yourself for sitting out on this issue.

I don’t even live in the neighborhood and I’m writing a letter on behalf of a friend of mine who does live in that neighborhood. Because I’m a friend and it affects both his and Fullerton’s future. That’s why I’m here in the first place.

I’m against the stadium for countless reasons but for me the big issue is funding. The College claims that they don’t have plans for the stadium to show you what they want to build and YET they have an estimate of $4Million to build it. That $4Million is hogwash because they weren’t able to build a new Field House and Gym Upgrade for less than $4.8Million.

They won’t show you what they want to build because they don’t want you writing letters and getting angry and trying to stop them from ruining your neighborhoods. 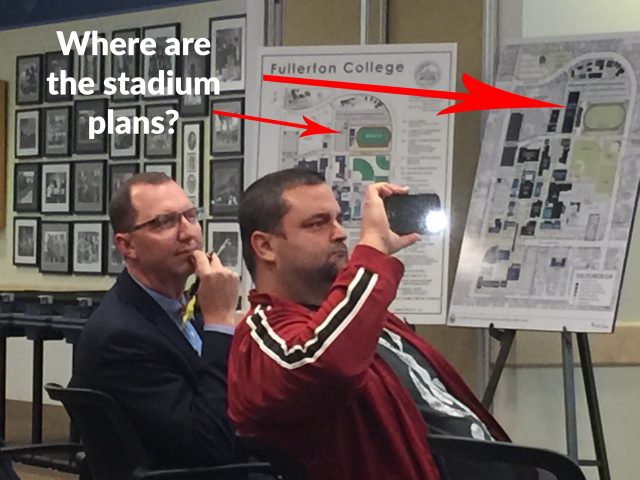 This isn’t up on Bastenchury so don’t expect much help from the “Responsible Development” people or many, if any, of our elected officials because even though Jesus Silva lives in the affected area considering that while he was at the Scoping Session he’s pretty much A.W.O.L. on this issue as he was on just about every issue during the campaign. He ran a “nice” status quo and substance free campaign so I expect the same from his term on council.

When we asked at the Scoping Meeting about the money for the stadium and brought up that money is fungible and that it looked like The insult on this project is that when Measure J Bond money is brought up the College claims this Stadium isn’t tied to that and that they’ve somehow saved the $4Million dollars and will be putting it up themselves. Oh really.

Shouldn’t Fullerton College be using that miraculously saved money, that was likely culled from higher student fees and costs, to maybe pay off some of the Bond Debt that our residents are saddled with and therefore cut the amount of interest we’ll owe in the future? Wouldn’t that be the prudent thing to do instead of building more while our debt and interest accrues.

42 Replies to “The Sherbeck Stadium Swindle”