As  you know from our previous report on this matter, the proposed improvements include a football field (estimated during the presentation to cost $4 million to build, so consider that a low floor to the likely final cost) but does not include improvements to the Veteran’s Center. When this discrepancy was addressed, Fullerton College President Greg Schultz gave the following explanation:

Let’s take these two responses one at a time, shall we?

First, the characterizing of the veteran’s center as just one of many improvements that the NOCCCD would like to perform is extremely dishonest. Let’s re-wind the clock again to back when NOCCCD sought voter approval for their $574 million construction bond:

This was the main image on the Yes on Measure J Facebook page, which is still up and running as of today’s date:

This was the ballot statement for Measure J (nocccd_af). Note in pertinent part:

Note the promise that “Measure J requires annual audits and an Independent Citizens’ Oversight Committee to ensure every dime is spent as promised.” (emphasis added)

And of course this was one of the direct mail pieces sent out to gin up support for Measure J: 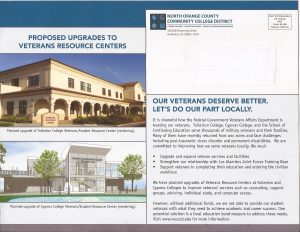 The veteran’s center was not just one promise among many, it was the single most prominent spending proposal in the Measure J campaign materials and ballot statement, and without that promise it is unlikely Measure J would have passed in the first place. By the way, I am getting off track here but note the reference to the “shameful” treatment of veterans by “our federal government’s veteran’s affairs department”. Specifically, the veterans affairs department continued to demand more taxpayer money to improve medical care to veterans, pocketed the money for the bureaucrats within the VA system and continued to offer shoddy treatment to veterans. Just how, exactly, is the treatment of veterans by the NOCCCD trustees any different?

Now, supposedly, according to Mr. Schultz, the NOCCCD is “scheduled” to receive funding from the state pursuant to the general obligation bond recently passed by the voters (Proposition 51). Even if the money does materialize, however, the fact remains that the NOCCCD did not keep its promise to veterans and to the voters regarding the spending priorities for Measure J.

Now on to the second point: Joshua Ferguson rightly pointed out during the scoping session that money is fungible and saying you won’t use Measure J to build a football stadium is meaningless if you just use Measure J money to pay for something else and use that money to build the stadium. More to the point, however: if Measure J money isn’t being used for the stadium, why is this statement found in the introduction of the Fullerton College Initial Study:

“The North Orange County Community College District (District) is updating its Facilities Master Plan for its Orange County campuses: Cypress College, Fullerton College, and its School of Continuing Education in Anaheim. The 2011 Facilities Master Plan provides an analysis of the evolving student body and makes planning recommendations based on educational needs. The District is undertaking a comprehensive improvement and building program to make the upgrades and repairs of existing buildings, to construct new facilities to improve the safety and educational experience of those attending the colleges, and to meet projected enrollment based on growth in population and jobs and the state Chancellor’s Office enrollment projections in accordance with the Measure J Facilities Bond Program. Measure J was passed in November 2014 and will issue $574 million in bonds to fund upgrades to technical job training facilities, aging classrooms, and veterans’ amenities. Key Measure J priorities include the following: (1) upgrading antiquated science labs, lecture halls, technology, and instructional equipment to better prepare students for growing fields of study and high-skill careers; (2) enhancing classroom space and training centers as well as technically trained workers; (3) expanding veterans facilities and services as well as job placement centers to train and retrain veterans as they transition into the civilian workforce; and (4) making health and safety repairs, energy-efficient enhancements, and other needed facility renovations on each of the District’s three campuses.

“At Fullerton College, the District plans to construct the following projects as part of the Facilities Master Plan (proposed project): …The addition of field lighting and 4,500 stadium seats to Sherbeck Field.” (emphasis added)

In other words, we are supposed to believe that Measure J Money has nothing to do with the Sherbeck field stadium, even though it is part of the improvements “in accordance with the Measure J Facilities Bond Program.”

I still maintain this stadium should not be built,  but if the Trustees are going to proceed despite the myriad of objections they should at least name it Veteran’s Field, rather than Sherbeck field. That way, the NOCCCD’s promise that Measure J was for veterans wouldn’t be a complete lie.

25 Replies to “Do Not Trust the Trustees”