Your Fullerton City Council majority — consisting of Fitzgerald, Chaffee, and Silva — made one of the worst decisions in recent memory last night.

Desperate to protect their pensions, and to keep pension contributions at a minimum, the Fullerton Police Officer’s Association (FPOA) approached the City about extending their contract.  They voted yes.

CalPERS pension costs are skyrocketing as a result of poor investment returns, and far too optimistic rates of return.  To “correct” this problem, CalPERS is demanding the City of Fullerton pay more in the years ahead.  The table shows pension costs for FPOA members which consist of Police Officers, Police Corporals, Police Sergeants, and a small handful of non-sworn civilian employees, such as Police Dispatchers.

That’s $12.3 million of new money the City of Fullerton doesn’t presently have. 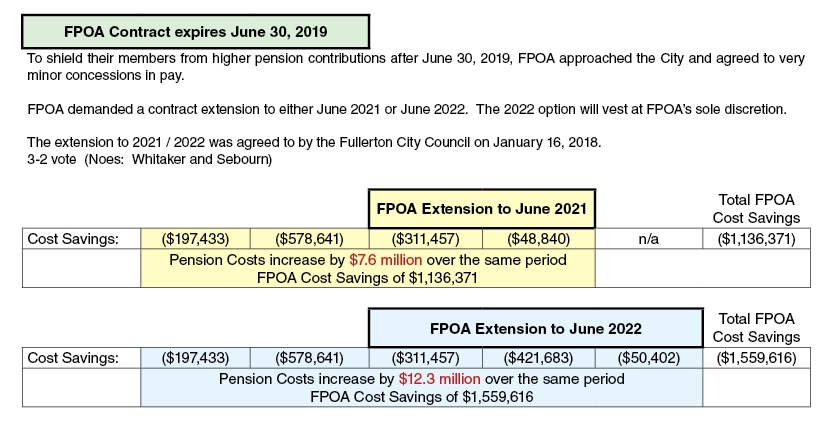 The timeline of the FPOA contract status is illustrated above with the agreed to “concessions” which are disingenuous at best.  As noted, the contract extension runs to 2021 at the earliest, and possibly 2022 if FPOA decides to exercise that option.

You might be thinking to yourself, wait a minute, if their current contract expires June 30, 2019, why not negotiate a new contract at that time to get a better handle on the escalating pension costs?  That’s precisely the problem.  Instead of acting in good faith for Fullerton residents, council members Fitzgerald, Chaffee, and Silva rolled over to satisfy the public safety unions that paid big money to help them get elected.

The worst part about the FPOA contract, and the extension handed out last night, is the City cannot reopen negotiations to combat rising pension costs.  The promises are now etched in stone through 2021 or 2022 regardless of what CalPERS does.

All very troubling, not just for basic principles, but because the California Supreme Court is expected to rule in 2018 on the so-called “California Rule” which prevents government agencies from reducing already promised pension benefits.  The court’s decision will carry significant implications either way.  If they overturn or modify the “California Rule,” Fullerton could have sought to renegotiate FPOA pension benefits upon the expiration of the contract in June 2019 and saved Fullerton residents millions of dollars.  Conversely, if the “California Rule” is upheld, CalPERS will likely respond by further lowering the discount rate (assumed rate of return).  A lower discount rate will cost the City of Fullerton tens of millions more in the coming years.

At last night’s meeting, the introduction of a new financial forecasting tool was presented earlier in the night, before the FPOA extension came up for a vote.  The gentleman making the presentation noted that his model predicts a U.S. recession in the year 2020 — right in the middle of the FPOA extension.  I was at the meeting and brought this up when it came time for the FPOA vote.  I also pointed out that Fullerton’s brand new City Treasurer, who started on January 8th — just eight days prior — should be given a chance to review the FPOA proposal and offer his thoughts to the City Council.  After all, the existing FPOA contract didn’t expire for another 18 months, so what’s the rush?

Council member Sebourn registered his opposition to the FPOA proposal, and then, without another council member saying a word, it passed with a 3-2 vote, Sebourn and Whitaker voting no.

Last night’s recklessness puts us a couple steps closer to municipal bankruptcy.  When the Library is forced to cut hours or close completely, when Parks and Recreation has to shutter the community center, when Public Works has to stop paving streets and repairing broken water mains, you now know exactly which three council members to thank.  It was failure on full display.  As usual.

13 Replies to “One of the Worst Decisions”