The last substantive article to run on FFFF site before its almost four year hiatus was this little gem about the “College Connector Study”, a $300,000 study designed to convince the Fullerton City Council that a streetcar system in costing (in their estimate) $140 million was exactly what the City of Fullerton needed. Why? Well, because building the streetcar would encourage high density development all along the rail line, turning Fullerton from a two story bedroom community into a six story high density, high traffic eyesore.

And, just to be clear, that was the argument in favor of wasting $140+ million on the streetcar.

Based on that report, three members of the Fullerton City Council (Chaffee, Fitzgerald and Flory) voted to make a streetcar part of the City’s transportation plan.

For the next three years, progress on the streetcar has stalled, and a competing proposal in Anaheim (this one estimated at $325 million) was shot down by the City Council after a coalition of good government activists ousted the Chamber backed majority from power. Unfortunately (to borrow the tagline for the Friday the 13th Part VI poster), nothing this evil ever dies, and the Fullerton Trolley is back. And like all bad horror sequels, it’s even bigger and more elaborate than before, while making even less sense.

I present to you, the Orange County Centerline:

The Centerline (something which has been in various stages of development at OCTA for over a decade) incorporates the Fullerton plan, along with a proposed streetcar line through Santa Ana, and several other lines. The plan is to run the line all the way through Harbor Boulevard all the way up to the transportation center. This would probably explain why that streetcar has been popping up on the artist conception for the Fox Block (image above).

OCTA recently provided a presentation to the Fullerton City Council at Tuesday’s meeting, which can be found here . No mention of which government entity will pay for the project, but even if the OCTA picks up the entire tab, we will at a minimum be on the hook for the maintenance cost , just as Anaheim is with the ARTIC Wasteland. Anaheim taxpayers have been forced to dip into the general fund for every year of ARTIC’s operation, as the revenue generated ($1.6 million) is nowhere near enough to pay the operation ($3.9 million). But hey – the City of Anaheim was given a fancy trophy for agreeing to shoulder these expenses, so the tradeoff was totally worth it, in some people’s eyes.

The Streetcar/ trolley concept is an absolutely terrible idea for too many reasons to count. The cost is astronomical , the benefit miniscule, it will render the streets it is located on un-drivable (seriously, just picture trying to make it through Downtown Fullerton with that thing blocking traffic). Oh, and it will also further undermine bus service in the county, because the cost of running a streetcar line is substantially higher than rapid bus service. 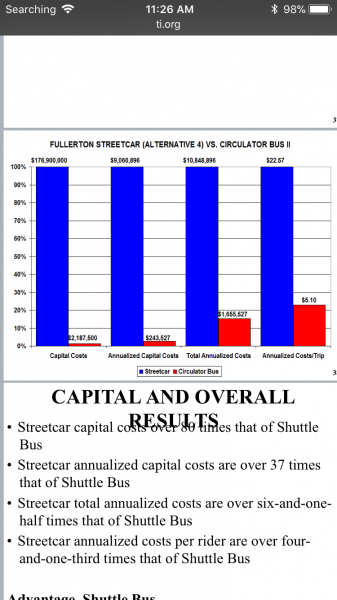 So to sum up, the OCTA wants to take Orange County into the twenty first century by spending hundreds of millions of dollars developing a nineteenth century technology designed to service people who don’t need it, at the expense of the bus riders who do. Sadly, this is about par for the course for state and county government, minus the exceptionally high price tag. Lets give the Center Line project – and every other streetcar project proposed in Orange County – the quick, merciful death it deserves.

13 Replies to “While We Were Away: the Train Kept On Rolling”