Lobbyist-councilmember Jennifer Fitzgerald took a powder from the budget meeting on Tuesday. Perhaps the potential embarrassment was too much to contemplate.

But she did send in this letter in lieu of her presence. Since she wants it to become “part of the record” we know that it is really meant to be a political PR document. For a little help FFFF has highlighted some fun parts. 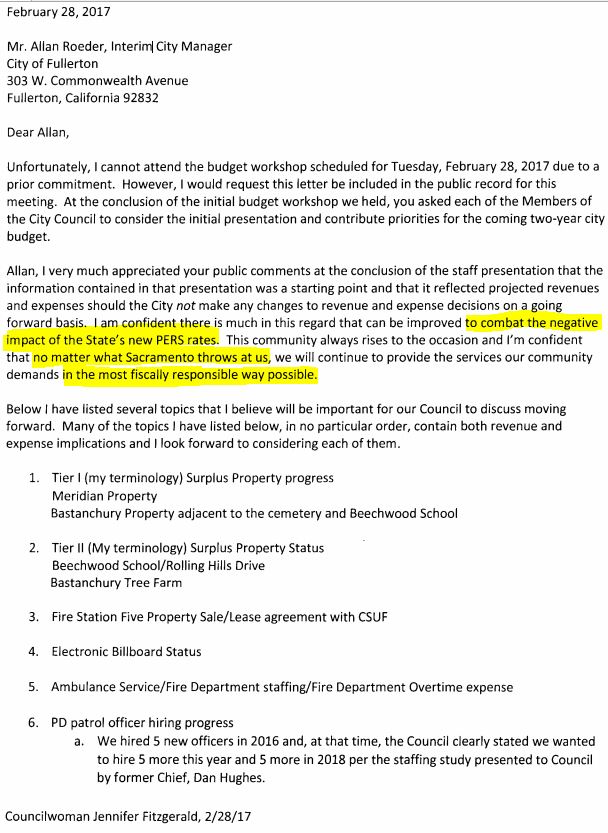 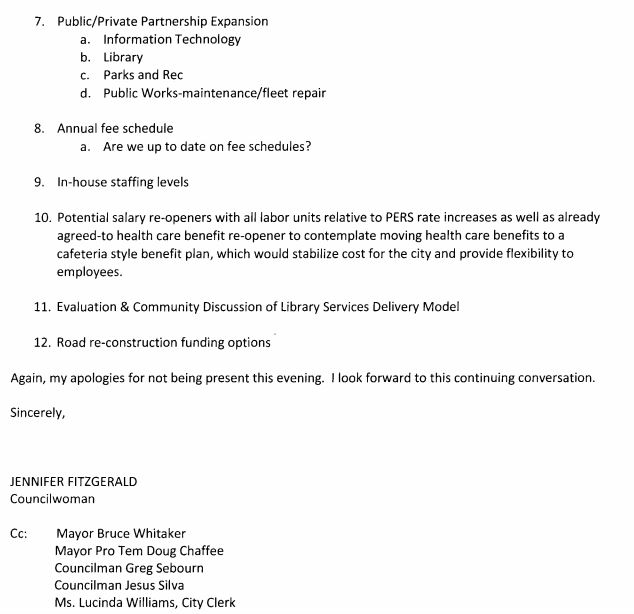 Okay.We now know that Fitzgerald is blaming “Sacramento” for Fullerton’s gloomy, no, desperate fiscal projections. We can’t expect her to make reference to her own irresponsible deals with the unions or remind us of her campaign lie that Fullerton’s budget was balanced. We can’t expect her to admit that everyone has known CalPERS projections have been BS for years. No disappointment there.

Scrolling down her wish-list we see the properties she wants to sell off to her developer pals, a one-time fix that won’t fix anything. More insidious is the “public/private partnership” expansion, or P3 in the parlance of the lobbyist’s guild, in which the public generally pays for the same thing twice. Electronic billboards? Like the fuzzy, illegible ones along the 57 put up by Placentia when things got dire next door? Wow, that really is desperate! The ad revenue from signs would be peanuts (but oh no, let’s not discuss Behind the Badge. That loose change is lost in the couch forever).

You have to give Fitzgerald credit, being what she is. After putting Fullerton in a dire financial hole she is still looking for ways to direct profit to people who have or who might contribute to her political future; or to other politicians in cities where Pringle and Associates have clients.

Do you feel better knowing that “this community always rises to the occasion?”

25 Replies to “The Speech From the Empty Chair”