On Saturday the city will shut down several public streets for an event called the “March for Science.” It’s the local version of a nationwide protest of federal budget cuts to scientific research. While the event organizers claim that it is non-partisan, critics say its the nerdy version of yet another anti-Trump protest.

Naturally the city bureaucrats were eager to accommodate to the public’s expression via a gathering on the city hall lawn and a march through downtown streets, right? Of course not. The City of Fullerton declined the assembly. Organizers were told to come up with $12,000 for city fees, a $2 million insurance policy and provide 90 days notice before starting the march. 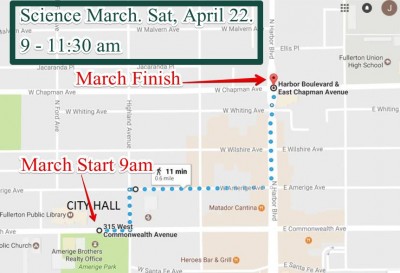 What were these fees supposed to pay for? $8,000 went towards some sort of a traffic control plan and $4,000 was earmarked for police fees. Specifics costs were unavailable, but we can read between the lines: it’s $12,000 to put up plastic barricades and have some cops stand around, collecting overtime.

The ACLU got involved and lit up the city for charging excess fees they claim were intended to “discourage community members from exercising their First Amendment rights.” 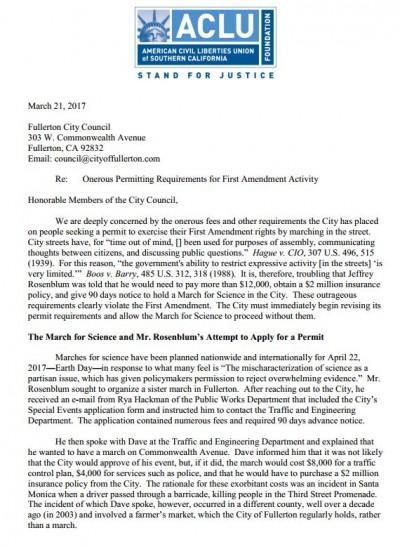 Predictably, the ACLU communique prompted a change of heart at city hall. City management found a way to drastically reduce fees to a mere $175. The march will proceed as planned, without most of the ridiculously expensive bureaucratic requirements.

The moral of this story, of course, is that city hall’s default reaction to 1st amendment activity is to put up artificial financial/administrative barricades and prevent the unwashed masses from organizing and criticizing government. Around here, if you can’t bring in a lawyer to assert your rights, you’re nobody. That sounds familiar.

On the other hand, I am reminded of a peaceful Fullerton march that occurred in 2011 without lawyers, city approval, plastic barricades, insurance policies, traffic control, fat cops on overtime or any sort of certificate of authenticity. How did that happen?

19 Replies to “A March for Science, Road Closures and the ACLU”