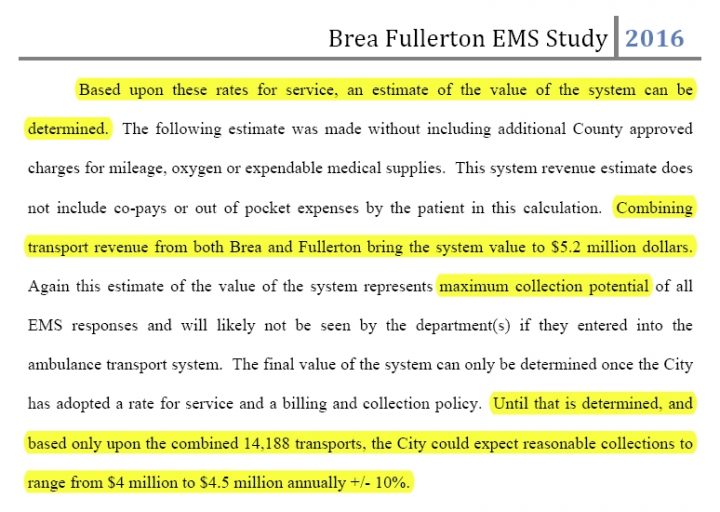 The study is full of incomplete and misleading sentences, so it’s impossible to know what the final sentence (above) was meant to say.  Earlier in the paragraph, they talked about combined Fullerton and Brea revenue.  The last sentence refers to the “City” expecting collections to range from $4 to 4.5 million.  I think they meant to say JPA.

Alas, the drooling continues as the consultant advocates for more bad ideas.

In agreement with the City Attorney, the consultant feels that Fullerton is what’s called a “.201 city” (referring to Health & Safety Code 1797.201) and would be able to set its own rates for ambulance services.

Oh yeah, $1,650 for an ambulance ride isn’t an unreasonable cost — if you’re earning in the high six or seven figures a year. But for 98% of Fullerton residents, this is a significant expense to bear.

This is especially true for those with no insurance and high deductibles. For some, the current rate structure is enough to break the bank… 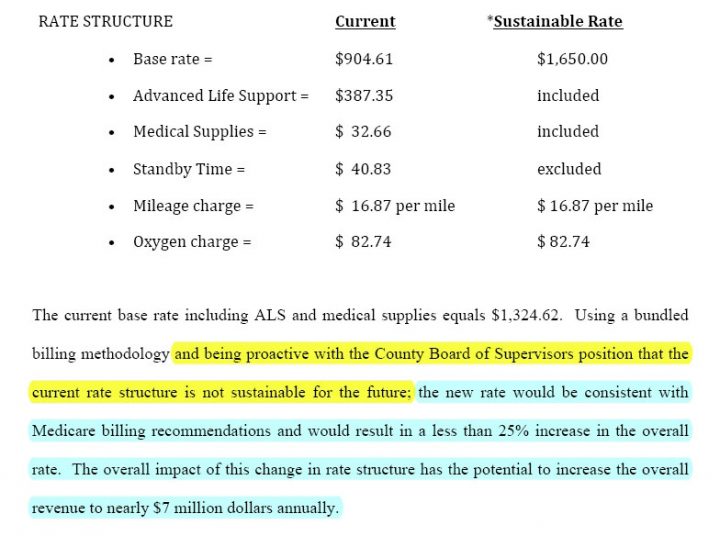 Should we celebrate because $1,650 amounts to “less than 25% increase in the overall rate” as noted above?

In an era when rising medical and health insurance costs are having significant impacts on our lives, why aren’t we looking for ways to the extent possible to reduce costs? The study by A.P. Triton, LLC gave no consideration whatsoever to easing the burden of ambulance costs on people like you and me.

Believe it or not, there are Fullerton Firefighters opposed to this proposal on moral grounds for the very reasons I stated above.  They, too, realize the burden of ambulance costs on lower income and chronically ill residents.  Good for them.

This all leads to my final point.  Think about your friends, family, and neighbors whose health deteriorated so badly and so quickly they needed paramedics and a ride to the hospital.  How much longer did they live?  Were they ever able to work again?  How much lost work and income did they have to endure?

Exploiting people for things out of their control, during the worst periods of their lives, is no way for a government to operate.

Tomorrow’s study session will be held at the Fullerton Library Conference Room at 5:00pm.  Be there, if you can.