On Tuesday the City Council held a special Budget Workshop to go over options to keep us from going to insolvency thanks to CalPERS. All departments were asked to come up with cuts to their budgets in spite of the fact that public safety is the biggest driver of our debt.

Miraculously when forced government bureaucrats were able to find it in themselves to not throw tax money away. That it takes a fiscal crisis for the government to care about spending other people’s money is infuriating but not shocking. Ultimately most departments either offered to not fill positions or cut back on $50 boxes of paperclips or whatever frivolity they found.

FFD brought up the idea to negotiate a contract with CARE Ambulance to net the City a cool $1Million in new revenue. They qualified/blackmailed it by saying that they’d have to lay off 3 Heroes if that Ambulance idea was shot down. However, knowing that the council won’t let go of any hero staff at least FFD came to table with something. What did FPD put on the table? 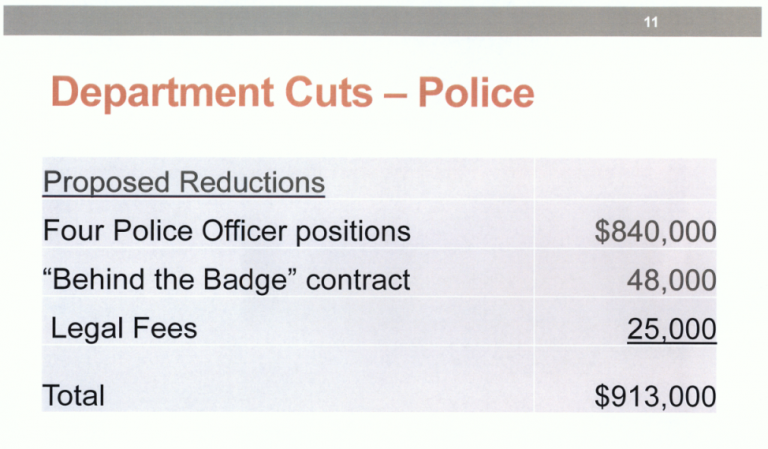 They put up four police officer positions. This was so laughable that staff, during the presentation, reiterated that this wasn’t going to happen and was put there because FPD had to put something.

So FPD effectively offered to cut nothing. NADA.

Fitzgerald straight up said during the meeting that she wouldn’t vote to reduce Hero staffing. At a previous meeting she tried to save the paltry $48,000 for the horrible Behind the Badge PR nonsense and I doubt she’d even let us cut that $25K in legal fees given the choice.

The department, knowing that there aren’t three votes on council to reduce FPD staff, gave the Fullerton taxpayers the middle finger by not even trying to reduce their budgets. I don’t know, maybe don’t blow through so much ammo down at the range for starters ($58K/Year). Maybe end a few subscriptions or cut back on the pay-cations we send heroes on all the time. How about you stop beating people or wrongfully arresting folks and save us some settlement money at the very least? Something? Anything?

An F-U to the taxpayers from the very people bankrupting us so they can retire 20 years before any of us with their ridiculous 6-figure pensions. The only thing worse than the Interim Chief giving us all the bird is Fitzgerald sitting up on the dais, her fake (R) self to blame for our ever increasing debt, going along with this hogwash.

They don’t want to cut personnel? Fine. Cut something. Come back to us when you want to act like adults and not petulant children unwilling to give up even one toy.

19 Replies to “FPD Insults the Taxpayers Yet Again”