During the hearing he was asked, under oath, about his involvement in the Joe Felz DUI disaster. According to an article in the Voice of OC, Hughes claimed that Felz was afforded some sort of “objectivity” by the orders he issued to his officers that night. He also had some choice words about Fullerton. Let’s go to the audio (transcribed below without his “uhs”):

“When there is a, especially in the city of Fullerton, where there is somebody, whether it be a City Council Member or in this particular case the City Manager, those types of incidents are gonna, what I would describe, blow up. No matter what that decision is made regarding the outcome of that case there there will be allegations and conspiracy theories and all sorts of information that comes from that. So, uh, generally speaking the supervisor would notify a Lieutenant, that Lieutenant would notify the Captain, the Captain would generally either make the decision or contact me.”

Allegations and Conspiracy Theories. How quaint. That’s almost as cute as when Pat McKinley tried blaming the Kelly Thomas protests on “outside agitators”.

Let me break this down for former Chief Hughes and the cops in the audience.

That same “If you aren’t a criminal so what are you afraid of?” maxim that you all love so much? It applies double to you. Our fair residents have no reason to trust the FPD after the years and years of corruption and corrupt officers that just can’t help themselves from turning to the dark side. Bad Apples you say? Maybe, but I don’t see any heroes stepping up to put them down. I don’t see officers testifying against their corrupt allies. My inbox isn’t exactly brimming with HeroMail™ regarding what needs to change on the inside. Maybe if that blue wall of silence didn’t protect violent felonious acts and sexual predators we wouldn’t feel the need to make “allegations” about your culture of corruption.

Further to the point the Felz incident has nothing to do with the outcomes of a “case” but rather with the circumspect treatment at the scene of a crime. Nobody cares if everybody on city staff was called that night because what matters is that AFTER the calls were made the officers on the scene opted to not do their jobs be it by choice or by following possibly illegal orders.

Hughes stated in his own memo that Felz smelled of alcohol and yet nobody made sure that the situation was beyond reproach by administering a breathalyzer. Felz was treated differently than the thousands of drunks that are arrested yearly here in Fullerton and that’s how you end up with “allegations” and “information that comes from that”. 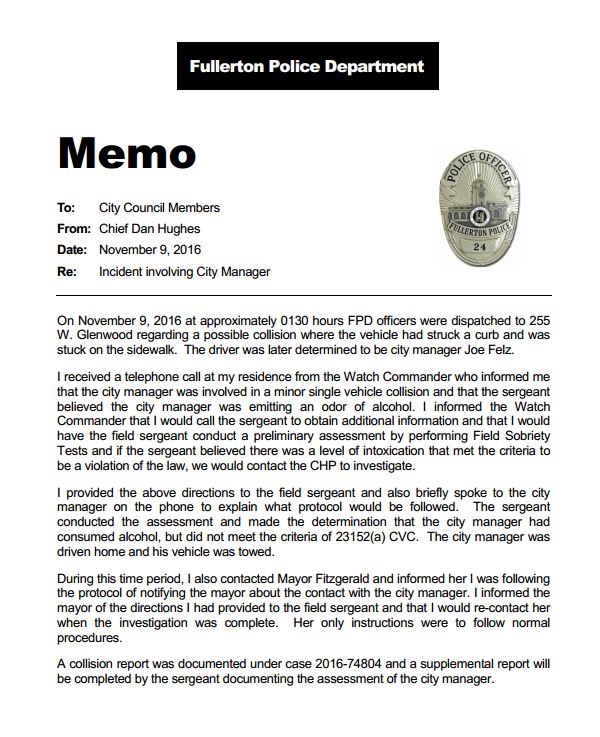 As for the “conspiracy theories” comment? The idea that Hughes was complicit in a Felz cover-up isn’t the stuff of conspiracies as that’s just simple deductive reasoning. THIS is a Conspiracy:

Exit Question: In the above audio Hughes claims the following:

I believe the Watch Commander from Hughes’ own memo above was Lieutenant Andrew Goodrich. So was protocol and the chain of command, generally speaking, broken when Lieutenant Goodrich called Hughes and not his Captain? And if so, why?