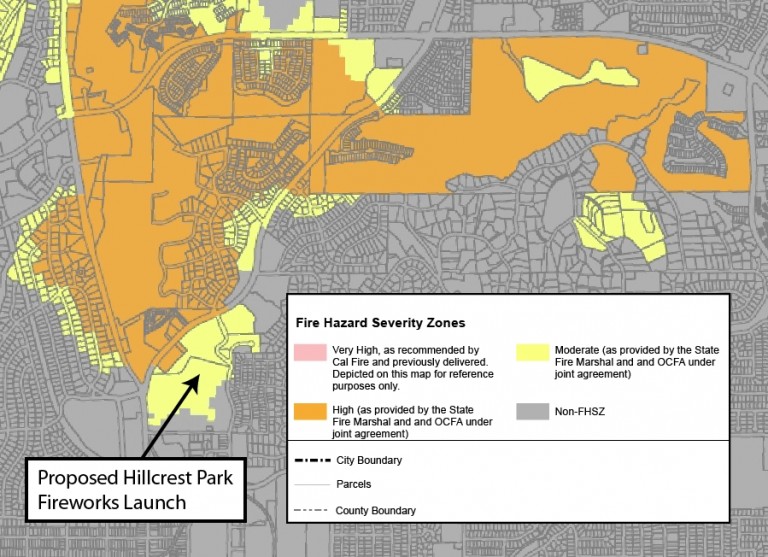 Another City Council agenda, another questionable proposal by Parks & Recreation.

Next Tuesday, the City Council will consider a new location for the Fourth of July fireworks and celebration.  The Fullerton Union High School stadium is no longer available for such purposes.  News of the impending change has been known for some time, yet Parks & Rec waited until 2½ months before July 4th to bring this to the council for a vote.  Great planning!

Have a look at the agenda letter: 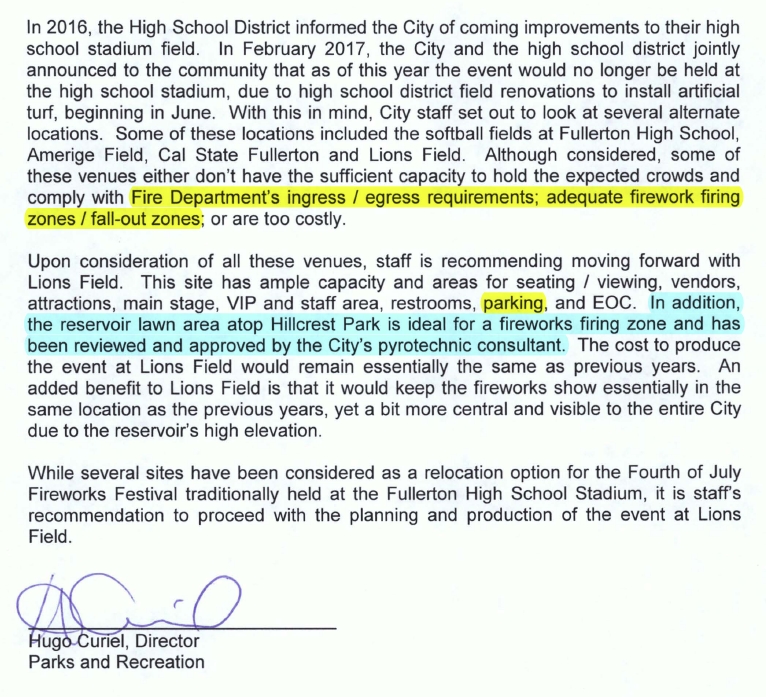 “Although considered, some of the these venues don’t have the sufficient capacity to hold the expected crowds and comply with Fire Department’s ingress / egress requirements; adequate firework firing zones / fall-out zones; or are too costly.”

No mention is made whether the Fire Department approves of this idea, only that the City’s “pyrotechnic consultant” gave the green light.   One would think if the Fire Department expressed concerns about hazards at CSUF, Amerige Field, or the softball fields at FUHS, they would be just as concerned about mature trees at Hillcrest Park going up in flames.

For the sake of discussion, assume fireworks launched from Hillcrest Park will be deemed “safe”.   How prudent is it to have festivities at Lions Field?  The City spent an extra $1.7 million to install synthetic turf there in 2010.  With extra foot traffic and “vendors, attractions, main stage, VIP and staff area…” using the field, preventing turf damage will be nearly impossible.  Have they taken this into consideration?  Probably not.

The agenda letter suggests “ample capacity” for necessities like parking.  Lions Field and the lower Hillcrest parking lot have about 170 parking spaces.   Everybody else will have to park their cars at North Court (like in previous years), the Elks Lodge, along Brea Blvd, at private businesses, or in adjacent neighborhoods.  Parking problems will be an issue no matter where the festivities are held, unless, of course, CSUF could be used, which leads me to ask…

This type of nonsense has, embarrassingly, become business as usual for the Parks & Recreation Department.  The commission is regularly bypassed on important issues. When those issues are presented to the City Council for a final vote, the department does so on an absolute last-minute basis — often with erroneous or incomplete information — leaving no time for a continuance, or for other options to be explored.

The residents of Fullerton deserve a lot better.  I wish the City Council and City Manager would put their foot down and say enough is enough.

26 Replies to “Burn Down Hillcrest Park?”