A few people, myself included, who had records requests in with the F.P.D. and City Hall regarding the Joe Felz/Sappy McTree incident were emailed denial letters today. Mine was based upon Section 6254(f) and 6255 of the California Government Code and was sent to me by Greg Palmer of Jones & Meyer, the law firm for our City Attorney “The Other Dick Jones™”.

One records request was hilarious because it denies records to one party when the denial letter was actually sent to another party altogether. These lawyer folk sure are awesome with the details let me tell you and it looks like we’re getting our money’s worth.

The first part of my emailed denial got to me because it says that I can view the 911 call log at F.P.D. during regular hours. Oh really? I went and tried that and they told me to put in a records request which could take x-amount of time and now my denial letter for the audio/video tells me that I can go look at something that F.P.D. told me I couldn’t look at when I was at the desk.

Isn’t it amazing how well the government lies to people? It’s almost as though they do this on purpose to frustrate the commonners while avoiding any real transparency.

After reading this boilerplate nonsense I emailed back to dispute the argument that “The Other Dick Jones™” said at Council when he said that the video/audio couldn’t be released owing to it being a “Personnel Matter”. I pointed them to a California Supreme Court Ruling and they were clearly nonplussed. But they responded that that’s not what their letter stated and I was in the wrong because of what CA Government Code 6254(f) said by gum.

So I asked what investigation? There was no citation and no arrest made so what was being investigated?

“There was an investigation that night. That makes any record pertaining thereto exempt for the reasons stated in the letter. I do not wish to debate this with you. If you are dissatisfied with the response you have remedies”.

That’s a swell little “F You Buddy, Sue Me” argument in more nuancey lawyer speak. So the law firm, and lawyer, that sent out of the denials told me that there “WAS” and investigation and not that there “IS” and investigation. Hmm. It occurred to me to look and it turns out that not one of our denial letters states that we’re being denied documents or access owing to an “ongoing investigation”. Even “The Other Dick Jones™” couldn’t fully keep his story straight on this point at council but nobody on council asked any follow-up questions to set the record straight.

Felz hit a tree. Then tried to drive away. Then F.P.D. gave him a pass, took him home and took care of his car for him all the while trying to sweep it all nicely under a rug. If they wanted to investigate anything they would have done it then. Or cited him then. Or arrested him then. This is all just boilerplate BS while the City Council and F.P.D. figure out how to make it all go away with stonewalling and obfuscation with our City Attorney, “The Other Dick Jones™”, uttering whatever incoherent nonsense he thinks he can get away with at council and then uttering it twice because our unserious and incurious Mayor, Jennifer Fitzgerald, won’t ask any questions and will simply parrot whatever party line lie needs to be said to keep the masses docile.

Just for context let us compare this alleged Drunk Driving Issue with that time, way back on 05 April 2016, when our Mayor Fitzgerald helped hand our certificates from M.A.D.D. to some of our officers and stood for photos to show how serious she & F.P.D. are about Drunk Driving. Well, Drunk Driving when the plebs are involved.

“Now I’d like to invite up Lt. Mike Chlebowski, who in partnership with Mothers Against Drunk Driving, is going to help recognize some of our talented police officers for their efforts in combating drunk driving in 2015 and ultimately saving lives.” 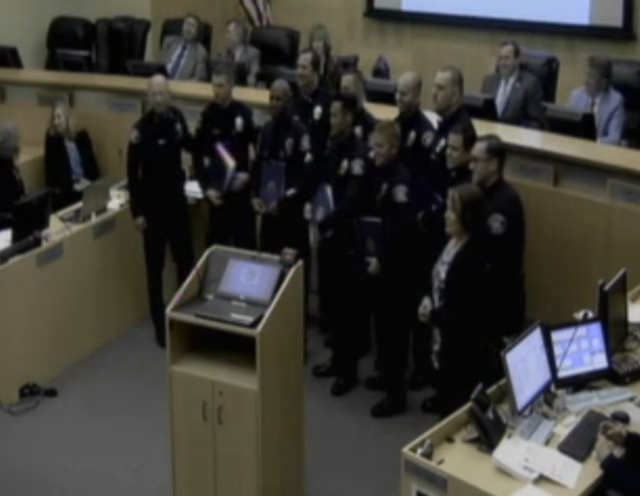 It’s too bad Sappy McTree doesn’t have a mother to get mad about Joe Felz’s alleged drunk driving because then perhaps our Mayor would care enough to ask a question or two or even go so far as to hand out a certificate.