Fullerton Stories published a story here about Hampton, Blatney and Craig- the three who participated in the Kelly Thomas killing, being “cleared” by the FBI. The author also quotes an unnamed “source” that 12 to 18 officers received some sort of discipline as a result of their actions on July 5, 2012”.

Of course they got the year wrong. The cop defenders seem to have lost track of the fact that Thomas was killed fifteen months ago.

The article is full of quotations and “inside information” of the sort that normally falls under the heading of POBAR protected, unless, of course it can be used in a self-serving way. Here the whole point is to show that the three accomplices are squeaky clean and deserve to be back on our streets looking for trouble; and that the FPD has meted out discipline and cleaned its own befouled nest. Gee, one of them rolled Kelly on to his side to help him breath; Hampton even got tased, poor chap.

But hey, finally Fullerton Stories actually had some comments! And they reiterated how concerned they are for their family’s safety knowing that three cops who piled on Thomas and who did nothing to save his life are back to work. I’ll summarize the comments here:

Citizens of Fullerton are angry that three coward cops who assisted in the murder of an innocent man and who did nothing about are working the streets of Fullerton as if nothing had happened.

Apparently Acting Chief Danny Hughes is still more concerned with protecting his boys than the value of the life of a human being.

The real heroes in this community are the courageous people who have been protesting every Saturday in front of the police station to have the three fired! 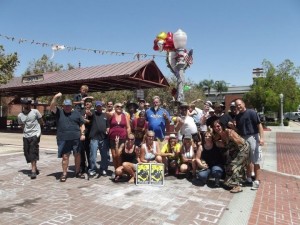 116 Replies to “Fullerton Stories Posts Inside Information; Finally Gets Comments”