His office’s five week study of a sample of 18 agencies (Fullerton was not in the sample of agencies) in the state has released a report: 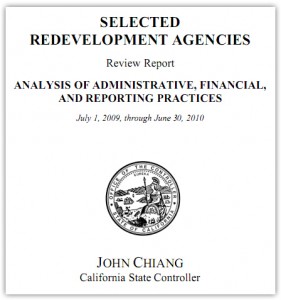 The authors have come to some disturbing, but not unexpected conclusions beginning with “The Controller found no reliable means to measure the impact of redevelopment activity on job growth because RDAs either do not track them or their methodologies lack uniformity and are often arbitrary.”  No one who follows the travails of redevelopment in our state should be surprised by this revelation.

The full report is replete with examples of agencies in different cities improperly filing required reports or not filing them at all as well as using funds improperly.  Chiang concludes that “The lack of accountability and transparency is a breeding ground for waste, abuse, and impropriety…”.

Even this short term study confirms what many people in Fullerton and elsewhere have maintained for years, that redevelopment law in California has allowed local agencies to abuse their mandates with impunity from the very start with the dubious establishment of the areas themselves.

“The report notes that the 18 RDAs share no consensus in defining a blighted area.”  The definition of blight was, of course, at the very crux of challenges against the unjustified expansion of the Fullerton Merged Redevelopment Area.  It is encouraging to see the state government challenging agencies to define the blight in their cities in clear terms instead of allowing laughable images of gum wrappers and aluminum cans in a vacant lot to stand as justification for the wholesale diversion of tax dollars away from vital city services.

43 Replies to “The State of Redevelopment in California”