On July 5th Kelly Thomas was approached by police supposedly because the cops had received a report of a man trying to burglarize cars in the parking lot.

Here’s the problem:  A Friend has confirmed through a records request that there were only two calls to the police for auto burglary in the Fullerton Transportation Center on July 5th, and neither one had anything to do with Kelly Thomas or anyone else in the area at the time. 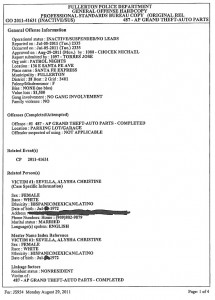 In fact, one call was made early in the morning and the other came in at 11:30 pm, well after Kelly Thomas had already been beaten to death. Both calls were for stolen catalytic converters, an unlikely target for a homeless man with no tools.

So what really led officers to investigate a vehicle burglary at 8:30 pm on July 5th? Why were no calls logged or reports taken before Kelly was arrested? Who reported a crime, and how did they report it without going through the dispatch system?

It’s really starting to look like the whole burglary thing was an invention; an excuse to harass a homeless guy who wasn’t doing anything wrong.

481 Replies to “The Missing Phone Call”