Attorney Mark Cabaniss has provided us with more expert analysis on the potential prosecution of the Fullerton police officers responsible for Kelly Thomas’ death:

It is getting close to decision time for the DA in the Kelly Thomas case.  While the investigation is still not completed and must be before any charges are brought, if any are brought, some of us are nervous, and increasingly disturbed at the way things are going, or not going, and at the unseemly deference given to the six police. 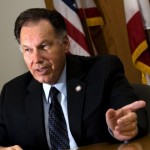 Unfortunately, in public pronouncements about the case, the Orange County DA’s office has sometimes given the impression that they are on the side of the police, even though the police are the criminal suspects.  This is unusual.  Usually the DA is on the side of the people, and against the alleged criminals.  Usual prosecutorial practice is to charge as many people as possible, with the most serious charges possible, in order to create the most leverage for the DA to get people to plead guilty and settle the case without a trial.  For example, in a case with multiple defendants, the DA might make a deal for one or more defendants to agree to testify against the other defendant(s) in exchange for reduced charges, or even outright immunity.  And in every case the DA charges the most serious charges warranted by the facts, so that he can get the defendant to plead guilty to a less serious charge, in exchange for getting rid of the more serious charge.  But in this case, the Kelly Thomas case, the DA has set a pattern of preemptive surrender, conceding points to the (possible) criminal defense even before any charges are filed, indeed, even before the investigation is complete.

For example, the Orange County DA said, HERE, that he had seen the unreleased surveillance tape, and had seen no evidence of intent to kill.  Legally speaking, this is an inane non sequitur, equivalent to saying that he had seen the tape, and seen no evidence that anyone was left-handed, or 5 foot six—it simply has no legal significance to the case whatsoever.  If the police are charged–and we have to wait to see what the investigation reveals about any criminal culpability–they might be charged with felony murder, under which a death is murder, even if unintentional, if it somehow is caused by the commission of any of several dangerous felonies.  For example, kidnappers might accidentally leave their hostage locked up too long in an airtight room, where he suffocates.  That would be felony murder, even if the kidnappers were racing home out of concern for their hostage’s air supply, and were delayed too long by a flat tire.  The bottom line is simple, and for the defendant, brutal:   In felony murder, intent is irrelevant.  So why is the DA talking about some legally meaningless point?  A cynic might say that it looks like an attempt to mislead the public, telling them that there is no evidence of intent to kill, so that the public won’t question a decision not to prosecute the police for murder.  But the police can absolutely be prosecuted for murder even if Kelly Thomas’ death was unintentional, as long as they can be prosecuted for an underlying dangerous felony, such as mayhem or torture.  I for one am betting that the DA knows this, since his office prosecutes felony murder cases all the time.  In fact, there is a case of the Orange County DA’s office prosecuting an unintentional felony murder in this past Friday’s Los Angeles Times.

If the DA were to decide on torture felony murder as the appropriate charge, he has at least one capable prosecutor to handle the case, the one that got a torture conviction for the Orange County DA’s office against an Austin Powers bit player (LA Times).

Certainly the conduct in the above torture case was horrific, but not, I think, more horrific than tasing a man over and over while he cried out for his Dad to save him.

Moreover, an involuntary manslaughter charge in this case would rest on what may turn out to be a very flimsy premise, namely, that the police were doing something lawful (“making an arrest”) in the first place.  Normally, the prosecutor would scoff at such a self-serving statement as a misstatement of the facts, and say that beating an unconscious man to death is not “making a lawful arrest.”  Normally the argument that a murder was actually only an involuntary manslaughter would be the defense lawyer’s argument to make, since it is customary practice in criminal trials for the defense lawyer to defend the accused, not the prosecutor.

Second:   the DA’s office put out a statement, found HERE, saying that if the police are prosecuted, they will be prosecuted for second degree murder.  What happened to the idea that we had to wait until the investigation was complete before jumping to conclusions regarding the culpability of the cops?  Why second degree murder?  Shouldn’t the DA prosecute a first-degree murder case, if that is where the investigation leads?   There are felony murder cases that can be brought for both first degree murder and second degree murder.  There is even at least one first degree felony murder charge, which might be applicable to this case, with mayhem as the predicate felony, under which the DA can seek the death penalty, and probably already has, in cases in which the suspects were ordinary criminals, instead of alleged police criminals.  The DA’s office, in this statement, for some reason, indicated a desire to give the six suspects a huge break, possibly even sparing them from the death penalty, before the case is even investigated, even charged, or even plea bargained.  That is not how things normally work.

To be fair, the DA himself also said, HERE, that everything was on the table, including, presumably, first degree murder prosecution.  Still, it does make one wonder what kind of internal discussions they are having in the DA’s office.

The third concerning statement, to come out of the DA’s office regarding the Kelly Thomas case is found HERE, and was in reference to the various threats that have been made against the police, which threats were used as justification for not releasing the names of the six police officers to the public.  One of the “threats” enumerated by the DA’s office was the following statement:  “Kelly Thomas was murdered by numerous officers and they should get the death penalty.”  Strange, isn’t it, that the DA walks into court every single day and says “This murderer should get the death penalty,” and yet, for some reason sees that exact same statement as a “threat” in this case.  It might be a threat if the statement had been “the police are murderers and WILL get the death penalty;” but the use of the conditional words “they should” by whoever made the statement indicates a belief in a qualifying condition precedent to the imposition of the death penalty, i.e., that the murdering police should get the death penalty IF they are found guilty of capital murder.  If I say “State law provides that those who are found guilty of capital murder can get the death penalty,” while that certainly sounds threatening to those who have reason to fear state law, it is, nonetheless, a statement of fact.  If a criminal defendant were to say to the judge, in court “Your Honor, the DA is threatening me.  He is calling me a murderer and he is trying to get me the death penalty,” the judge would nod and explain that yes, the DA is doing his job.  In sum, the law is a “threat” only to criminals.

The police department spokesman complained that the “threats” were anonymous, and thus difficult to track.  But I am not anonymous, and I believe that the witness accounts of the beating death of Kelly Thomas that have appeared in the media, i.e., that six police beat a man into unconsciousness and continued beating him even after he stopped moving and lost consciousness, are, if found credible after the current investigation, strong evidence to support a charge of felony murder against all six officers involved.  I also believe that if the investigation reveals that Kelly Thomas would have needed plastic surgery to repair his face had he lived, or that he had broken bones, or permanently and severely damaged organs, such as his eyes or ears, that a charge of felony murder with the crime of mayhem as the predicate felony would be legally warranted.  I further believe that if the police were subject to a felony murder prosecution with mayhem as the predicate felony, then the prosecutor should seek the death penalty.  Finally, I also believe that if the police were to receive death sentences after trial, then they ought to be executed, just like other killers.

In sum, the DA must soon decide whether to charge the Fullerton six, and if so, with what.  I for one wish him well.  In the first story linked above, the DA called the killing of Kelly Thomas “a tragedy.”  It wasn’t.  A fatal accident is a tragedy.  A young man dying of cancer is a tragedy.   A young man getting shot or stabbed or beaten to death is a crime.

284 Replies to “Reading the Tea Leaves: Parsing the Statements out of the DA’s Office”