When I was a kid, liberals were all about civil rights, social justice, anti-police corruption, women’s rights, etc., etc., etc.

In the wake of the Kelly Thomas murder at the hands of the FPD, and the revelation of a potential serial sex offender in FPD uniform, Fullerton’s liberals have been silent as a graveyard. A great letter to the Fullerton Observer by a guy named Steve Baxter sums up the situation to perfection.

Maybe this silence marks the difference between a statist liberal and what is now being called a “progressive.” I don’t know. 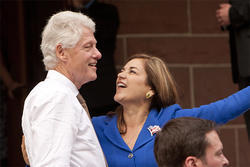 But one thing I do know: the first category includes our esteemed Congressional She-Bear, Loretta Sanchez, whose district includes south-central Fullerton, as well as some of the locations where women allege they were sexually assaulted in the backseat of an FPD patrol car!

Here’s an e-mail from one of the recall petition signature gatherers who re-enforces the ugly truth that Ed Royce isn’t our only congressional problem.

I was at the Stater Brothers today with my recall petition and I had an interesting conversation with a 50-ish red-headed woman who happens to work for Congresswoman Loretta Sanchez.  I asked her if she was interested in signing my petition to recall our City Councilman and Mayor and was sort of shocked when she declined.   As she was putting away her groceries I asked her what Ms. Sanchez position was on the recent events that had occurred in Fullerton, and she told me that Ms. Sanchez was staying out of the matter because it didn’t involve her constituents.  I said that that was odd because I had voted for her in the last election and that I live in West Fullerton.  She said that Loretta’s district only encompassed a sliver of Fullerton and that where Kelly Thomas was beaten to death was out of her district!
I sort of left it at that, however when I got home and checked the district map for Loretta Sanchez I saw that not only is my home in her district, but the site where Kelly Thomas was beaten to death is maybe 200 feet from the boundary.
Is there any way that you guys can inspire this champion of women’s rights to engage in what’s going on here in Fullerton?  I got the distinct impression that Loretta Sanchez was looking to stay out of the fray and distance herself from what’s going on in her district, and I think that it’s important that she get involved or make a statement on what her position is pertaining to violations of Kelly Thomas’s civil rights, as well as the violation of the these recent allegations of sexual assault under color of authority by members of the the Fullerton Police department.
Best Regards,
p.s. I’ve changed my political affiliation to “decline to state” on my voter registration so there is no love lost on Loretta.
http://lorettasanchez.house.gov/our-district/district-map
It’s pretty obvious that Ms. Sanchez has seen her main chance in trying to ignore things in Fullerton and hope like hell that no one will ever associate her with what was done, or in her case what hasn’t been done. Comically Ms. Loretta found time from her busy schedule to attend the Fullerton Library re-opening – a building also not in her district – while 500 feet away people of good will were protesting the murder of a helpless homeless man at the hands of the FPD.

Disgustingly, Sanchez seems a lot more interested in the civil rights of Vietnamese women (who live eight thousand miles outsider her district) than with her own constituents.

Sanchez could get the Department of Justice fired up with a phone call. But even that smallest of gestures would require a modicum of courage.