With a little digging I have discovered that our old small government pal Matthew J. Cunningham, who raked in hundreds of thousands of bucks doing $200 an hour make-work for Rob Reiner’s tax-and-redistribute Children and Families Commission has found a new gig. Or, as is more likely the case, has had a gig given to him by his repuglican overlords.

A year ago FFFF exposed the hypocrisy of this guy making a small fortune off of the nanny statists and social engineers at the Children & Family scam. After that sweet run was terminated due to uncomfortable exposure, Cunningham landed a contract with the social engineers at the Orange County Transportation Authority to do…well, I’m not real sure.

It might be instructive to remember that two targets of Cunningham’s tiresome tongue treacle, Bill Campbell and Kurt Pringle, were OCTA Board members when he got this new arrangement last November. I wonder if this contract was result of an honest RFP or if was just laddled out to Mr. C. behind closed doors.

Here’s the agreement, noting Mrs. Cunningham as the “Principal” of the operation and the Mr. as “Project Manager.” 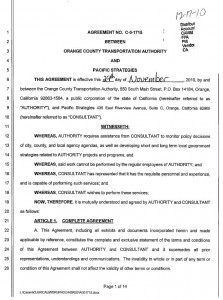 Hmmm. $30K a year with a scope of work that seems ridiculously inconsequential. Basically it entails reading city agendas for transportation issues and telling the OCTA who’s on city councils and going to some meetings. Tellingly, there is no listed OCTA project manager named to ride heard on the egregious wordsmith suggesting that OCTA contract quality control may well be no better than that exercised by the C & F Commissariat. 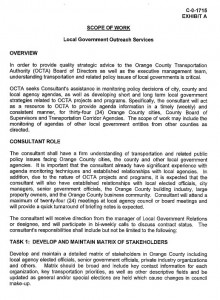 View the scope of work

Well, I guess this means we’ll be doing a public records request for work product and billing records.

P.S. Please note that Pacific Strategies is still using the phony “Suite C” address – hilarious given that the Cunninghams operate their business, whatever it does, out of their house.