Every once in a while you read a story about some innocent citizen whose privacy and safety are wrongfully violated by a police raid executed on the wrong home. Picture the frightening scene of a modernized para-military police force busting their way into your home with guns drawn, putting your innocent family members in immediate danger. Of course it’s almost always perpetrated under the guise of the interminable War on Drugs.

Well, this time it happened right here in Fullerton, and to the last person whom you would expect. 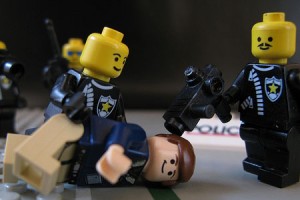 Notable conservative Christian activist and self-described “family values” advocate Robyn Nordell says that her family was mistakenly treated to an armed raid by Fullerton narcotics agents back on October 20th, 2010. According to statements filed by the Nordells at city hall, police quietly came onto her property one evening through her back gate and then entered her home with guns drawn through an unlocked back door. Once inside, police held the Nordell family at gunpoint while they checked her house, presumably for drugs and parolees.

Oops. It turns out they were actually looking for the neighbor who lived next door.

The Nordells helpfully provided photos showing the obvious differences between the two properties, including a deteriorating address marker on the back gate:

Well, that’s not very good. If you’re going to storm someone’s house using lethal force, you better make sure the address is right.

Robyn and her husband Chuck have demanded an investigation by the city council into this incident. While the police have been apologetic, actual follow-up and resolution seems to be lacking. It took several months and some persistence just for the victims to get a copy of the police report.

Corrective action? Unlikely. And if the cops do manage to change something, will they ever admit it to the public? Keeping incidents quiet is always best for them, but never good for the rest us.