Here’s a fun image captured by the journalists at Fullerton Stories: 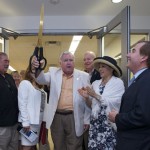 While only a few hundred yards away outraged citizens were protesting the police-bludgeoning death of Kelly Thomas, Fullerton’s liberal and repuglican elite were feting themselves at the opening of the new library wing.

Friends, you are invited to provide your ideas for a picture caption in the comments section.