I got hold of a press release from LULAC yesterday regarding their “plan” for County redistricting. LULAC stands for League of United Latin American Citizens, and the president of their Santa Ana chapter, Zeke Hernandez seemed pleased as punch with the monster he and cohort Arturo Montex have fashioned. First, here’s their map. 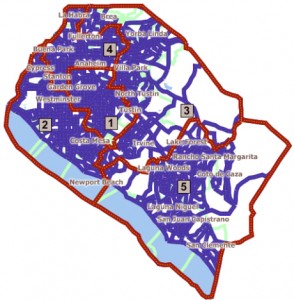 And here’s the text of their press release:

Santa Ana LULAC President Zeke Hernandez states, “There are well-over twenty plans being submitted by county supervisors, community groups and individuals. Board of Supervisors Chairman Bill Campbell announced at the May 17th board meeting that he himself is submitting four plans, including one suggested by former county supervisor Phil Anthony. We understand another county supervisor has submitted 10-12 plans through his/her appropriate office or through third party intermediaries. Other local elected officials may also be submitting their own plans.”

Due to population changes following the decennial federal census count in 2010, Santa Ana LULAC has been able to draft two supervisorial districts (1 and 4) with over 50% minority population. These two districts have a community of interest – sharing common social and economic interests. The Santa Ana LULAC Plan #3 is affirmed to stand on its merits for the purpose of a community’s fair and effective representation.

Hernandez added, “We have brought to the attention of the Board of Supervisors its concerns that the redistricting committee has not adopted a definitive process on how it will review submitted plans and how it will determine which plans will be recommended for adoption. The committee has acknowledged it may even re-draw a submitted plan by the public to be sent to the Board for approval. Committee members are comprised of staff aides to the supervisors and were appointed by them to act on their behalf. The committee recently revised its writing of the committee meetings, but continues to do its best to provide very little content, thus thwarting public knowledge through written commentary.”

Santa Ana LULAC Public Policy Director Arturo Montez emphasizes, “We have drawn a plan that has ZERO concerns relating to incumbents, political parties and candidates. These plans were drawn, keeping in mind our strong adherence to the U.S. Voting Rights Act and the California Constitution. In addition, we have done our best to take into consideration the public’s concern for transparency and reform in the redistricting process.”

Montez continued, “Santa Ana LULAC feels its Plan #3 surpasses any other 20-23 plans that were submitted by the May 18th deadline. The question that now comes to the forefront: Will the Board of Supervisors recognize the dramatic demographic changes taking place in Orange County ? As proposed, District #1 has an 85% minority population, and District #4 has over 72% minority population. These are most likely the most heavily minority populated county districts in the nation.”

The redistricting committee will hold its first of several public meetings on Thursday, May 26 (2 pm) to review and receive public comments on the submitted plans. This first meeting will be held at Orange County Hall of Administration – Board Hearing Room, 333 West Santa Ana Blvd., 10 Civic Center Plaza, Santa Ana.

Established in 1946, Santa Ana LULAC Council #147 is the oldest LULAC council in California and is an affiliate of Orange County LULAC District#1 and LULAC National – founded in 1929 with its national office in Washington , D.C.

The mission and objectives of the League of United Latin American Citizens (LULAC) is to advance the economic development, educational advancement, public policy outcomes, housing opportunities, health awareness, and general civil rights protection of Latinos in the United States and Puerto Rico through community-based programs and services through more than 700 local LULAC councils nationwide.

The funniest part of this “ZERO concerns” drivel is this gem: Montez continued, “Santa Ana LULAC feels its Plan #3 surpasses any other 20-23 plans that were submitted by the May 18th deadline. Now, Art hasn’t seen any of the other plans, nor apparently, does he even know how many were actually submitted. Yet it’s Plan 3 surpasses any other!

Judging by the map above, LULACs main purpose is to create a Latino-majority district in the Fourth and a near-Latino majority in the First. Well okay, that’s their agenda. But the map necessarily carves up four or five cities, including Fullerton,  into two or more supervisorial districts in order to sequester “white” populations out of the districts in question. While ethnic gerrymandering for and against minorities is nothing new for, it flies in the face of one of the main goals of redistricting which is to keep cities wholly in one district.

This means that a decent plan should aim to consolidate Garden Grove and Newport Beach, not create more divided cities.

Sorry guys, back to the drawing board!

7 thoughts on “Carving Up The Turkey; Ethnicity Uber Alles”