After 30 years of debate, the city council is expected to vote tonight on the fate of West Coyote Hills. The “Save Coyote Hills” crowd will surely turn out in force, but can they stop the development completely? Unlikely, although council may have enough concerns to cause further delay. 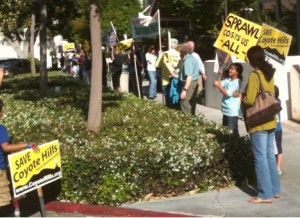 And even if council passes the proposed re-zoning and plan revisions, it’s unlikely that the battle will end here. One commenter has asserted that court action to further delay the project is guaranteed.

Rather than re-hash the multitude of arguments around Coyote Hills, I direct you to Cindy Cotter’s West Coyote Hills blog where she has a decent summary of the most recent council discussions on the subject.

One Reply to “Will the West Coyote Hills Saga End Tonight?”