That is a good question.

One of the fun things about public records searches is that you can also see who is doing searches. Now that’s good, clean fun!

We found out that Matthew J. Cunningham of the formerly Red County blog did a public records search on County Clerk candidate and Republican  Hugh Nguyen. He asked for Nguyen’s e-mails since the invention of the computer. Well, over two year’s worth, anyway.

Oops! That was going to be pretty expensive since the County would have to hire a contractor to collect the data and then it would have to be reviewed prior to release. The upshot was the County declined to satisfy the request. They did provide Nguyen’s 700 forms (statement of economic interest). 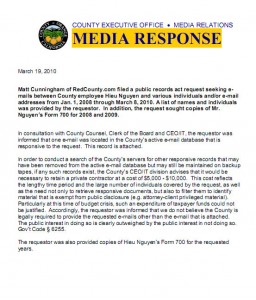 On the other hand a record search of available records turned up a brief and harmless discussion about Daly protegee Renee Ramirez’ very brief County Clerk campaign sent to Nguyen. Wow. Go to work and turn that into an issue, Matthew!

Now first, let’s dispense with the “why” part for the uninitiated. Cunningham claims to be a conservative Republican – he’s been chattering away just like one for years now.  And yet his mentor and string puller from way back is John Lewis, a campaign consultant and lobbyist who has been working for Democrat County Clerk Tom Daly behind the scenes since 2002. Daly recently quit the 4th District Supervisors race after a series of embarrassing revelations of waste and mismanagement in his office and has scuttled back to the County Clerk’s race so he can keep wasting money left and right as he protects our vital records.

Snooping on a fellow Republican, and one backed by a good share of the County Republican establishment in order to help a Democrat with an awful fiscal record? Bad boy. Bad, bad, boy!

Cunningham has already made it a point to parrot “untrustworthy” drivel about Nguyen he picked up at the local liberal blog and comically expanded upon; and hasn’t said a peep about any of Daly’s fiscal squanderings. How’s that for conservatism and accountability?

Now for the “how” of the great e-mail hunt. Presumably Cunningham could actually pony up the dough to do opp research on a Republican. Would he? That’s a lot of cash. If he does, it will look extremely suspicious and a reasonable person would have to question the source of the cash.

To wrap up, it’s pretty obvious that the Daly/Lewis/Cunningham team are worried about Nguyen. Daly has challenged Nguyen’s ballot title and a surrogate has actually challenged Nguyen’s use of his first name. Still it’s a County-wide race and Daly has plenty of name ID over the relatively unknown Nguyen.

But maybe they’re right to be worried. Are there more Daly skeletons that are about to tumble out of the closet?

28 Replies to “Why is “Red County” Editor Searching Records on Republican?”