Sometimes its hard to tell whether certain people are stupid or lazy. Or maybe a little of both. Take, for instance, County Supervisor Bill Campbell who is currently the Chairman of the OC Children and Families Commission.

As a commissioner he has approved big PR contracts to his political pal Matthew J. Cunningham whom he also appointed to the County Parks Commission. And I mean really big contracts. And apparently free of either competition or real scrutiny.

Part of Cunningham’s job is to ghost write pro-commission “op-ed” pieces for politicians across the political spectrum who either can’t be bothered, or who are too illiterate to do it themselves. The topic of these scribblings is always the same: protect the tax revenue! 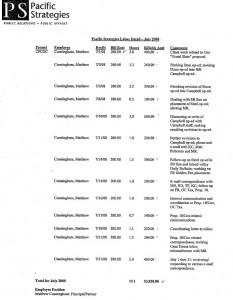 And looky here, we’ve uncovered the fruits of Mr. Cunningham’s labors in the OC Register.

There are some fun quotes about rigorous  audits and Grand Jury approbation that come a-tumblin’ out of the old mannequin’s mouth, but these are my faves:

“I can say unequivocally that if state government emulated the prudent, sensible and farsighted operations and budgeting practices of the Children and Families Commission, there would be no state budget crisis.”

Uh, yeah, like handing out a $200K per year PR contract that enables your pal to put semi-intelligent words in your mouth for $200 an hour.

“…while our commission contracts out as many functions as possible so more dollars go toward funding services rather than bureaucracy.”

See comment above. Contracting out unnecessary PR crap for $200 an hour services like facebook updates, going to lunch with Steve Greenhut, and passing out toothbrushes. Newsflash Bill – that robs funding. Contracting out for unnecessary services is incompetent. Directing that largess to a political crony is despicable.

“Taxpayers should cast a critical eye on the idea of abolishing such county Children and Families commissions, which are locally accountable and manage their budgets responsibly…”

Uh huh. Yeah. Sure, Bill.  You pass out hundreds of thousands annually for lobbying and PR most of which seems to be mysteriously directed outside Orange County. Well, Campbell also seems to be one of the masterminds behind the unintentionally hilarious Harry Sidhu for Supervisor campaign. And that, in a nutshell, really tells you all you need to know about that sawdust head.

And finally a free wordsmithing tip to the Wordsmith: when you’re going to put words in the mouth of numbskull try to avoid words like “panoply” and “unequivocally.”

9 Replies to “Pacific Strategies: Ventriloquism For Uncle Bill and The Little Kids”