In our series documenting the PR/lobbyist hungry OC Children and Families Commission we have shown how they have employed local political operative and Red County blog bloviator Matthew Cunningham to propagandize their myriad big-government good works.

We have seen how the preachy Mr. Conservative Republican was paid $200 an hour to do such things as update facebook pages, ghost write articles for liberal Democrats, and perhaps, funniest of all (in a sick sort of way) – coordinate toothbrush distribution to the Diocese. While he was at it, he amassed some mammoth paydays for his “Pacific Strategies” wordsmithing operation.

Of course you can’t really propagandize effectively unless you know what the opposition is saying. So enjoy this.

In January, 2009 Governor Schwarzenegger called for First 5 California to be eliminated in his 2009-10 budget. Regional commissions would have taken a 60% cut in funding.

KFI radio broadcasters John and Ken went on the offensive, and Cunningham was right there listening in at $200 an hour to formulate his defense of the Welfare State. Here’s the invoice entry: 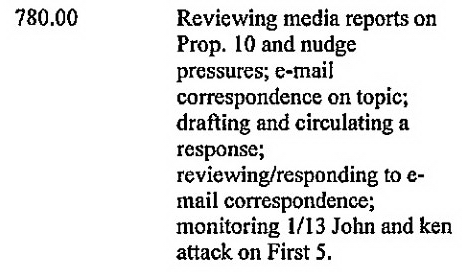 As I said yesterday, it’s way past time to put this Commission under the control of the Board of Supervisors so that at least contracts and policy can be authorized by elected officials in a much more public forum. And maybe instead of fixating on PR the kiducrats can concentrate more resources on actually helping poor children instead of well-off, hypocritical Republicans.