Apparently part of Matthew Cunningham’s deal as wordsmith to the OC Children and Families Commission  is to fill other functions from time to time – such as Ambassador to the Diocese of Orange with Dental Portfolio.

Here, in October and November 2007 we find Mr. Conservative Republican billing the taxpayers $200 an hour as coordinator of toothbrush distribution: 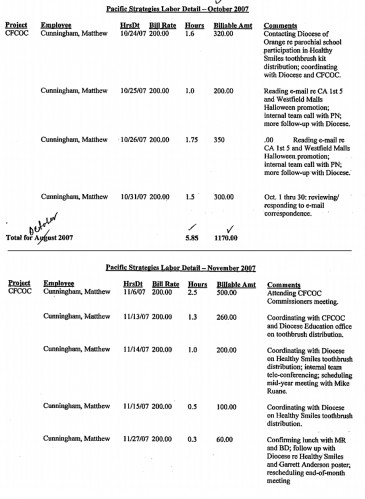 It seems as if the Commission was eager to insinuate itself into Catholic schools, too.

By the way, anybody out there know how many toothbrushes you can get wholesale for $200? Oy vey! Just more lax or non-existing oversight by our friends on the Commission.

Ironically, in the fall of 2007 Mr. Cunningham was hard at work in the trenches as a loyal foot soldier for the Diocese. But that’s a whole other matter.

15 Replies to “Pacific Strategies and the Big Toothbrush Caper”