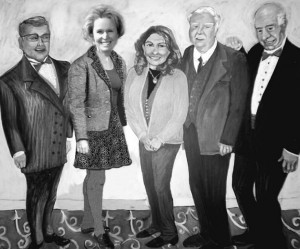 With the Primary Election over and candidates licking their wounds we jump into Tuesday’s Council Meeting to see what STAFF has in store for our elected representatives. View the full agenda

In closed session there appears to be some labor negotiations going on. First is a discussion regarding Chris Meyer’s position which I hear will be vacated soon. Second, Fullerton Municipal Employees Federation (FMEF) is meeting with Council to determine what they will meet and discuss in the future regarding lay-offs. At least that is what the agenda says. Actually, it says, “Discuss meet-and-confer topics related to layoffs”. Amazing! A meeting to talk about a future meeting! That’s government bureaucracy and waste for you. Why can’t these be public? I don’t think they are talking about a specific person or maybe they are. Either way, I would like to see just how spineless the council can be when it comes to the public employee unions.

There is a plethora of presentations planned which will probably draw the usual hapless attempts at wit from our mayor and perhaps Texas colloquialism which won’t make sense to anyone but the person saying it.

There are no appointments scheduled.

That’s probably a good idea since the City has suspended all of the volunteer commission and committee meetings except for a few. Those left intact are: Bicycle Users Sub-Committee, General Plan Advisory Committee, Library Board of Trustees, Parks and Recreation Commission, Planning Commission, Redevelopment Design Review Committee, and the Transportation and Circulation Committee.

This is a huge agenda with many millions of dollars being shuffled around. The consent calendar alone has 19 items. So, once again, buckle up and hang on!

Item 1 is the minutes from May 25 and June 1. Here is a tip for interested citizens. Go here and watch the videos of these meetings. The minutes just don’t do the meetings justice. You can watch all of your favorite council characters ranting about whatever comes to mind, even for the mindless.

Here is an interesting set of numbers to contemplate this election cycle. From June 2009 to April 2010, we have spent a total of $104,365,091 on operations. Of that total, we spent $14,359,679 on the Police Department and another $30,647,535 on the Fire Department. Those two departments with a combined total cost of $45,007,214 account for more than 40% of the total cost to operate the city for that time period. Is that too much? Maybe, maybe not. As expected, both allocations are less than was originally anticipated before the salary cuts.

And here we have the gem. The Land Czar spent $43,418, 409. That’s an astronomic chunk of change even for Warren Buffet. He spent $20,652,488 on capital projects like roads, sewer, and water. He then spent $12,366,308 on “affordable housing”. And just how much does Land Czar Rob Zur Schmiede on economic development? How about a paltry $578,800! It’s no small wonder why Fullerton doesn’t attract commerce and investment; we have our priorities out of order. The Land Czar spends 1% of Redevelopments total expenditures on economic development. It is obvious that the Redevelopment Agency is rife with incompetence and inefficiency.

Item 3 is a certificate from our public works director, Don Hoppe, regarding Measure M funding for street arterials. There is also some information on assessing our streets. It may be mildly interesting to public works connoisseurs.

Item 4 seeks to waive $450 in inspection fees for a car show at the Muckenthaler. Ok, not a big deal in my book. Let’s hope the Muck makes some money so it can be more self-sufficient.

The cost for item 5 is: $87,222 for excess liability; $146,266 for excess workers’ compensation; $10,000 for property insurance; $35,453 for auto physical damage insurance; $25,190 for airport liability (I wonder if the provider knows we mothballed the airport safety commission?); unknown amount for special event liability because it is purchased for each event as they come up; $6,464 for employee dishonesty (FFFF should file a claim for the lack of honest services rendered by various staff); $1,550 for public officials bond; and $0 for earthquake and flood insurance (we don’t need no stinkin insurance), but if we did the premium would be $513,338 (not buying insurance policies must be staff’s idea of saving taxpayers money).

The total cost for insurance which is omitted from the agenda is $312,145.

Item 6 is a change order for the State College grade separation (where the street will go under the train tracks). This is something we should all be concerned with. First, AT&T doesn’t want to or will not allow one of their vaults (an underground utility box) to be moved. So, we get to pay the design engineers another $470,227 to redesign part of the road. Second, OCTA wants the design to include AN EXTRA TRACK! OCTA says they’ll pay for it but that’s not the point. Why do they need an extra line of tracks? What do they have cooked up for Fullerton that they aren’t telling us?

Item 7 is the downtown Fullerton specific plan. If you have any issue with our downtown area, this is the best place to get involved. According to the agenda, this community based planning process asks questions like:

What is the vision for Downtown Fullerton as defined by the Fullerton community?
How can issues, such as parking and public safety, be best addressed from a systems approach to sustain positive outcomes?
Where and how can new development be accommodated in Downtown to maximize positive community benefits and minimize negative impacts?
How can necessary partnerships be achieved and alignments occur between an array of public, private, and non-profit interests to achieve a vital Downtown Fullerton consistent with community values?

If you want to make a difference, you have to step up and get involved.

Item 8 is the acceptance of the Rotary Club’s donation of $600 for the Police Explorer Program.

Item 9 is a contract for the employee group insurance program and will cost taxpayers $88,000 for each of the three years of the life of the contract. That’s a $264,000 total contract obligation to broker employee insurance policies. That sounds like something the employee associations should be doing for their members.

Item 10 is a $141,000 traffic signal improvement project for Malvern, Chapman, and State College. The accepted bid was $102,338 but then we have to include contract administration and inspection.

Item 13 establishes NO STOPPING ANYTIME on the north side of Chapman Avenue from State College to the 57 Freeway.

Item 14 discusses executive compensation which has been cut. However, on page 2 of the agenda attachment we find a list of base salaries for Fullerton’s public executives. The actual pay can be 20% lower than the base or as much as 20% higher.

Also in the agenda attachments are the skills set used by the City Manager to evaluate executive compensation.

There are a few provisions for retirement compensation contained in the document as well. This should be looked into further but is beyond the scope of this GIGANTIC post.

Item 15 is the official resolution denying Pacific Coast Homes (Chevron) development of West Coyote Hills. IMHO, this will be back before you know it.

Item 16 is another Land Czar land grab at 324 West Valencia Drive for $600,000. Three families will be displaced to make room for different families… where’s the RDA brake???

Item 17 is an agreement between Fullerton’s Parks & Rec and the Placentia-Yorba School District to provide after school recreation program at Topaz Elementary School. Although the school is in Placentia, the student body is largely from Fullerton. The information provided with the agenda seems a little vague.

Item 19 is a contract with the Caltrans to receive a state grant for the transportation center parking expansion project. Total proposed cost is $41,970,000. I can think of a lot of other ways to spend that tax money and improve Fullerton. As you may have expected, this is a Land Czar project with some help from resident engineer, Don Hoppe. Here is a breakdown on funding sources:

So, let’s total up how much taxpayer money our City Council, lead by Retired Police Captain Don Bankhead and advised by the Land Czar would like to spend via the passage of the Consent Calendar.

Ok, now let’s look at the rest of the agenda.

Item 20 is a public hearing on water quality. Just how bad is our water? Read Director Don Hoppe’s report and stop drinking the water.

Item 21 is an interim urgency ordinance for on-demand electronic signs. I’m not sure about the details on this and would like to hear what you think is going on. Smells a bit fishy.

Item 22 will rescind the 2:00 a.m. to 5:00 a.m. “Early Morning Parking” restriction on the north side of Woodcrest Avenue between Citrus Avenue and Orange Avenue.

Item 23 is worth the read. It appears that in an attempt to save money, our City Manager wants to take of the City Clerk’s official responsibilities and delegate a deputy city clerk all other daily duties. Supposedly, this will save the City about $36,000. Except that the City manager will probably need to hire another assistant. They also want to revisit creating a towing franchise which our City Manager estimates to bring in $300,000 annually. Police and fire positions are on this chopping block.

Due to the massive size of the agenda, I had to get some help with this from Greg Sebourn. As always, if I missed something, please let us know.