Apparently Norby was impressed with Hunt’s no-nonsense position on the failed “War on Drugs”. Earlier we noted an interview with Bill Hunt in which he acknowledged that it is wrong for local law enforcement agencies to collaborate with the federal government in arresting lawful users of medical marijuana. Clearly Hunt respects California voters’ assertion that medical marijuana is a state’s rights issue. 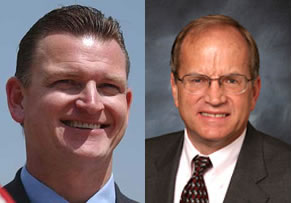 Norby also pointed out that Hunt is the only candidate who has ever received more than 3 votes. “That’s all Hutchens ever got, and 2 of those surely regret it now” he said, referring to the current Sheriff’s appointment to the position after Mike Carona was forced to resign in 2008.

Chris also gives Hunt credit for challenging Carona in ’06, back when most of the political establishment (including Norby) still endorsed Sheriff Mike.

Chris decided to make the endorsement after he and his wife met with Bill and Debbie Hunt recently at the Twisted Vine and Continental Room in Downtown Fullerton. “They are such nice people,” he said.