Harry Sidhu’s short lived “residency” at the Calabria Apartment, #116 is over, as we reported, here. We can’t say he moved because that would imply that he actually lived in an apartment behind the Linbrook lanes bowling alley in the first place, and nobody was buying into that load of road apples. But he has a new voter registration address.

So why the “move”? Obviously an implausible address had to be replaced with a plausible one. This was effected at almost the same moment Sidhu assembled his campaign “team.” A coincidence? Yeah, right.

Here’s Sidhu’s re-registration form at the OC Registrar of Voters office, where Harry has become a recognizable regular customer: 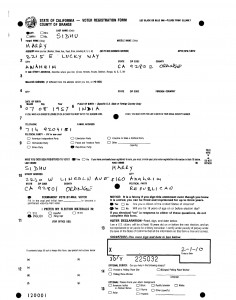 This other day I decided to find out where Harry “moved” to this time. It’s on the very scruffy southern edge of Anaheim in a new little four house subdivision; the signs on the adjacent street say Garden Grove.

Anyhow, I rang the doorbell and was greeted by Mrs. Harry Sidhu. I asked if Harry was home and she told me no; I told her I had sent Harry an email questioning his residency in the 4th Supervisorial District  and that he hasn’t sent me a response. I asked if she realized what Harry was doing was called “carpettbagging” and she told me that she did not believe they were carpetbagging because they moved into the district. I wonder if Harry told her that people who move into a district just to run for office are called carpetbaggers? I told her who I was and she told me that I was talking to the wrong person. We said goodbye and off I went.

Upon leaving I had to ask myself whether Mrs. Harry is just a day-time stage prop at another fake residence, or whether the family was really going to try living there. When you see the house and the neighborhood its still a real big stretch. Although there’s no pool hall next door, the neighborhood is a far cry from the Elegant Old Yorba Estate in the 3rd District, that’s for sure.