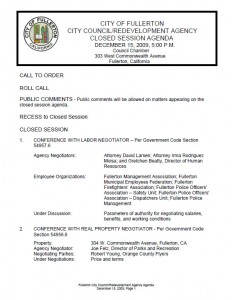 The Fullerton City Council has just released their agenda for December 15, 2009 and it’s a fat package!

Something near and dear to me is baseball so I take a little more interest when the subject shows up on the agenda.  Item 2 of the closed session is a conference with the real property negotiator concerning 304 W. Commonwealth Avenue.  It would appear that the Orange County Flyers of Fullerton want to move to downtown Fullerton to be closer to City Hall.  In fact they want to have the baseball field across the street where many a young man played pony league baseball.   The Duane Winters Field just might be the sight of the next Golden Baseball League Championship.  In March 2007 the team gave up being the Fullerton Flyers because the new partners wanted to be more marketable.  Hmm, sounds like an Arty Moreno stunt!  So the changed to the Orange County Flyers.  I have a t-shirt that says “Top 10 Reason’s To Be a Fan: …Reason #4: They aren’t the L.A. Flyers of Fullerton.”  That’s true; they’re the O.C. Flyers.  So, will Parks and Rec Director, Joe Felz, give them the field?  We’ll see…

Also in the closed session is another real property whiz-bang.  Rob Zur Schmiede is working on 655 W. Valencia.  In 2007 this was a 63 unit condo by John Laing and the project was in plan check.  3+ years later, what could they be discussing?  Price and terms with C&C Development’s Barry Cottle, according to the agenda.

There are a few appointments being made to the Library Board of Trustees.  Your favorite Mayor, Don “Don’t Mess With Me” Bankhead and Shawn “See Ya Later Alligator” Nelson.  Their terms are to expire December 31, 2012 – if they last that long.

We have a busy consent calendar to cover so hang on tight.  In the mix is the amended landscaping ordinance, group insurance for city employees, the employee’s deferred compensation, more sewer replacement, a bunch of Redevelopment stuff, air pollution, SALE OF THE ORANGE COUNTY FAIR GROUNDS (seriously – item 11),  Raymond Avenue grade separation, Fire Management Association agreement, Bastanchury/Valencia Mesa bike path.  There is too much for me to cover here so I’ll expand a little on just a few.

First, there for Redevelopment.  Item 6’s title should tell you everything you need to know… “Redevelopment Agency’s Annual Determination That Planning And Administrative Expenses Are Necessary For The Production, Improvement, or Preservation of Low and Moderate Income Housing”.  Yep that’s all you need to know so don’t look into it or question it.  I suggest that if you ever had a beef with Redevelopment, this is a chance for you to SCREAM at your elected officials.  This “determination” is the justification for wasting your money.  Because if that isn’t enough reason, read item 7, the Redevelopment Agency’s annual report.  This the RA’s justification for existence to the State and Feds.  If it doesn’t dazzle you with brilliance, rest assured, it will baffle you with bullshit!

Ok, enough with the Redevelopment Agency, let’s get down to real business.  According to item 8, it’s time to modify the signals at Orangethorpe and Highland, as well as re-stripe the area and add some signs.

Air pollution shows up 9th on the list.  It’s actually a MSRC grant for $450,000 for a compressed natural gas station.  I wonder how much money we will throw at it to get the gas station operational.  How much will we sell the gas for?  Are there enough customers to make it profitable or are we, the tax payers, suppose to subsidize CNG vehicle owners?  I’m sure the details are all there waiting to be found.

Don Hoppe gets an appointment as the Public Works Dispute Hearing Officer.  Will he get paid extra for the job?

And then we have the Fairgrounds.  It appears that the council would like to request the Governator to not sell the O.C. Fairgrounds.  I’m sure Arnold will read the letter and quickly cancel the whole sale.

The Raymond Avenue Grade Separation is getting a change order for AECOM.  Their fee is $2,450,000.  It is unclear from the agenda or staff recommendation just how much the change order will cost us, if anything.   According to the recommendation, there is $63,739,000 for the project.  That’s a lot of money!

Skipping ahead to the Public Hearings we have some more Redevelopment doozies.  The first one, item 15, is for 524 and 530 S. Richman Avenue where the Olson Company wants to erect 34 moderate income housing units.  I believe the Honorable DR. Jones said we “…absolutely have to build these. It’s the law!”  Well, sort of…not really.

Also, item 16 is the Five-Year Implementation Plan for Redevelopment Agency.  The item is on the agenda so that a request can be made to have a public hearing on it and consider adopting the plan.  What a racket!

Here is an interesting one.  Item 17 is an appeal to install a nature/wildlife habitat along a portion of the Juanita Cooke Greenbelt (known to many who are not as up to date on official trail names as “The Equestrian Trail Behind the Court House that goes to Laguna Lake”).  After looking at what they wanted to do and where, I’m not sure why the City didn’t take advantage of the situation.  Here are a couple who want to improve the trail where it runs along their backyard.  They wanted to make it wilder (I guess) on the slope NEXT TO the path.  The fix could have been to enter into an agreement whereby they can install certain pre-approved plants in a pre-approved manner, the total costs of which would be paid by the applicant.  The City could have the homeowners maintain it until such time as the agreement is cancelled in which case the homeowners could be on the hook for removal/restoration costs.  The cop out from Parks that the trail has two paths and this would confuse people is silly.  Are people really that stupid?  Also, from what I have seen, the encroachment would be onto the slope.  I don’t think the mountain bikers are on the slopes nor are the walkers or horses.  So what’s the problem?

The city will also be looking at parking permit fees in certain areas. (See item 18)

Moving on to Regular Business (I said this was a big package), we have a few reports on the City’s financials as well as the Airport.  Also in the Regular Business is the Commission/Committee At-Large Appointment Process.

I urge you to read through all of the supporting documents for the agenda.  That is where you might find some nuggets of truth that should be brought forth.  I simply don’t have enough hours in the day to do it.  Thanks for reading and feel free to point out other topics that I missed or are important to you!