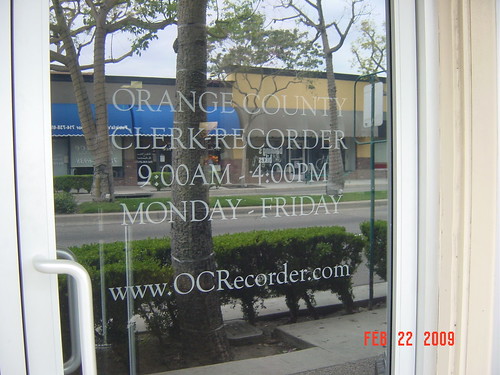 Very recently OC County Clerk Tom Daly opened a branch office in downtown Fullerton. Now, while some may think this is a good thing, we here at FFFF are caused to wonder about the expansion of the Clerk’s premises while the County is in major financial retrenchment mode with lots of folks getting pink slips. Fullerton has done just fine without a Clerk/Recorder branch office for over 120 years.

Now the Clerk/Recorder gets to pay rent every month for its posh new digs while already occupying space, bought and paid for, at the County Civic Center.Is the opening of this office and the soon-to-be announced candidacy of Daly for 4th District supervisor coincidental? We think not. Winning Fullerton is key to winning the 4th and it sure looks like Daly is trying hard to raise his visibility level in F-town. If not, why did he wait until his seventh year in office to make this move?

Oh, we truly are cynical, aren’t we?

Rather than expand his physical presence in the County, Daly ought to be figuring out a way to computerize the Clerk/Recorder function completely thus saving people the hassle of having to go his offices at all, wherever they may be.