The Fullerton Senior Center on Commonwealth was shut down by the County on Thursday after the City of Fullerton allowed a cockroach infestation to get out of control. An inspection report from the Orange County Health Care Agency shows that live cockroaches were found in a food storage area next to the kitchen after a roach sighting was called in by a concerned citizen. The center was shut down overnight and opened back up the next morning, just in time for Friday’s Senior Hawaiian Luau Party.

When it’s not being used to dish out extra crunchy meals to senior citizens, the City rents out the facility to create some healthy taxpayer-subsidized competition for Fullerton’s numerous privately-owned restaurants and banquet halls. These entrepreneurial establishments must pay taxes to the city, only to have the city turn around and use that money to subsidize a facility in direct competition with their own business. That just doesn’t seem right, does it? Fortunately for those business owners, the city is not capable of managing a safe dining facility. 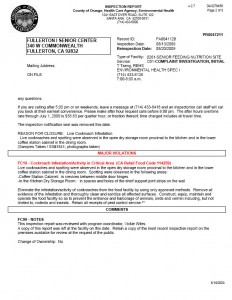 It’s not hard to imagine that many of the city’s customers will be canceling their reservations until the city gets its act together. In the meantime, the old folks who eat lunch there every day should chew carefully.