Skip to content
Posted onJanuary 2, 2021January 2, 2021Chris Norby
by Joshua Ferguson29 Comments on Should Cops Arrest People for Dining Based on One-Man Rule?

*The following is an editorial provided to Friends for Fullerton’s Future by Former CA Assemblyman and Fullerton resident Chris Norby.* 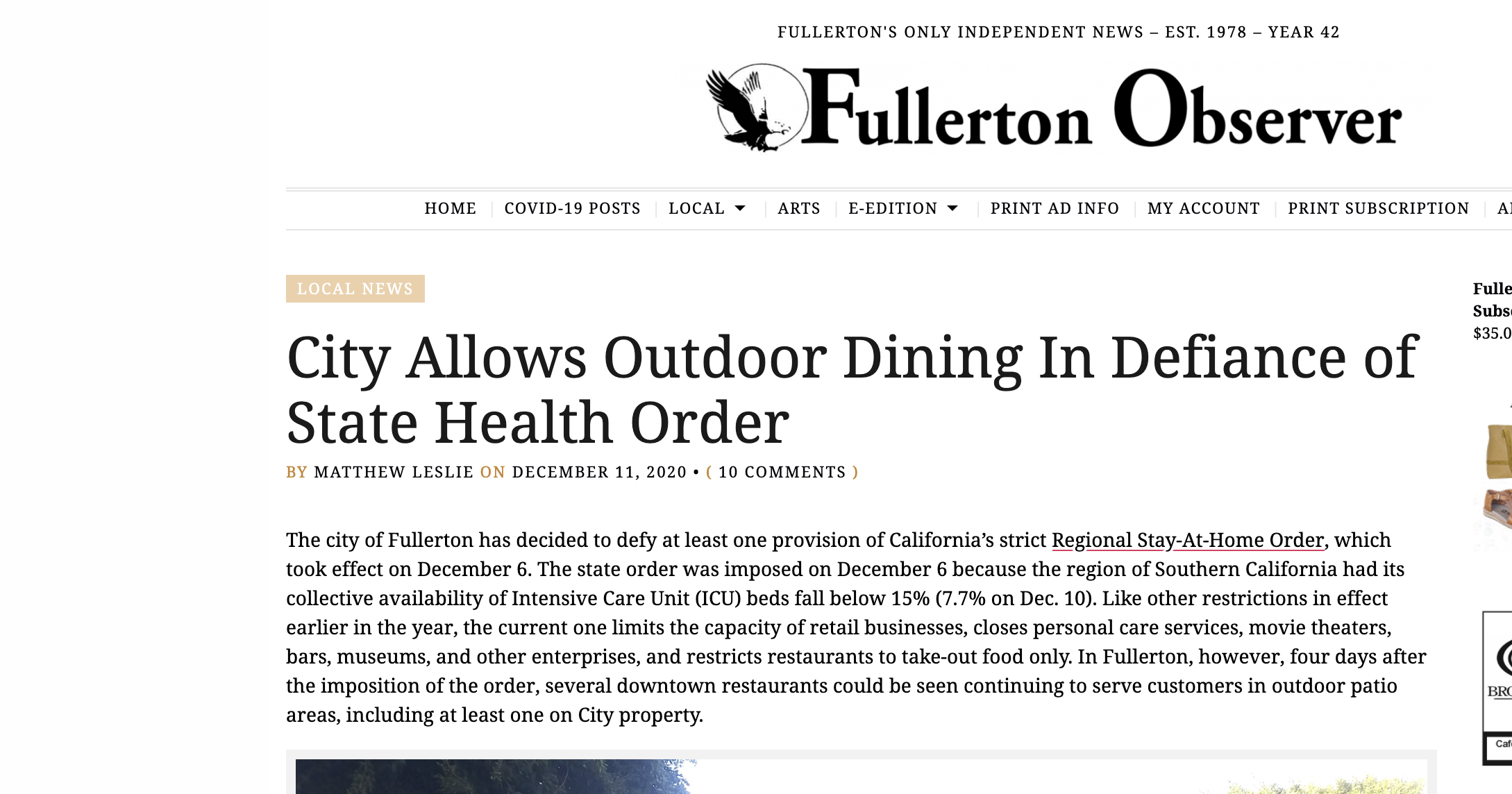 “City Allows Outdoor Dining in Defiance of State Health Order” blares the front page headline of the Fullerton Observer. The article bemoans the lack of police response in chasing off outdoor diners and closing local restaurants whose only crime is feeding people. Strange sentiments from a “progressive publication”?

California state government is a democracy whose powers are divided among the legislative, executive and judicial branches. The “Regional Stay-At-Home Order” referred to by the Observer is the arbitrary edict of one man –Gavin Newsom– that has not been passed by the legislature. The Fullerton Police Department should not enforce it. It should not shut down hundreds of local businesses and throw thousands out of work.

Emergency powers granted the Governor are of limited scope, when there’s no time for legislative action. This pandemic has been with us now for 10 months, yet none of his 58 emergency edicts have been approved by the legislature, which has had plenty of time to act. On December 8, L.A. County Superior Court Judge ruled against that county’s outdoor dining ban, as there was no “risk-benefit analysis” showing any connection with Covid-19 spread. Newsom himself doesn’t think so either, as his crowded unmasked dinner at the French Laundry showed.

There are many places in the world where the police enforce one-man rule. Does the Observer really want Fullerton to be one of them?

At least that’s what Ackerman, Inc, would no doubt be saying about our recently elected State Assemblyman Chris Norby if their opinion mattered anymore. We just said it in a cheap attempt to grab your attention to read this post.

What happened was that yesterday one of our typical idiot Assemblymen proposed a resolution declaring next week “anti-cursing week” (or something of the like).

END_OF_DOCUMENT_TOKEN_TO_BE_REPLACED
Posted onJanuary 26, 2010January 26, 2010OC's Fourth District
by The Fullerton Shadow42 Comments on NUFF Forum Comes, Goes. A Little Learned, But Not Much

If avoiding specifics, dodging straight answers, and putting ignorance on public display were virtues, then the crop of 4th District supervisorial candidates at the NUFF forum were virtuous in the extreme.

An hour and half of questioning produced almost nothing in the way of inspired leadership and mostly cliched responses to pretty specific questions directed by the Register’s Jennifer Muir. They all agreed that north County was getting screwed on park funds (or lack of same), that yacht owners should pay something toward patrolling Newport Harbor, and that there was going to have to be a multi-tiered pension system in the future. Well, that’s just stating the obvious.

Here’s a brief and summation of the candidates and how they comported themselves.

1. Richard Faher. Incapable of constructing a concise, intelligent answer. If someone really wanted an excuse to get drunk they could do a Richard Faher Drinking Game and take a shot every time he starts a sentence with the word “okay.” Faher did provide the amusing highlight of the evening when he thanked “Friends for Fullerton” for putting on the event. Gee, you’re welcome, Richard!

2. Rose Espinosa. Despite the attempts by the Local Left to paint her as some sort of credible politician, she came across as, well, just plain dumb. And by dumb I mean a sack of door knobs kind of dumb. And ignorant. She appeared perfectly clueless about County issues and kept deferring to what others had said. She spoke in the lamest sort of generalities about every single question put to her. She repeatedly referred to getting her information from her city manager, and that’s bad. She talked about “collaboration” several times. Ouch.

3. Shawn Nelson. Came across as pretty articulate and knowledgeable about the ongoing harbor patrol budget scandal. His statements about getting County government smaller and less intrusive was cliched stuff right out of the GOP playbook, but his comments about why the Clerk/Recorder performs marriage ceremonies was right on. He also may have surprised some by his observation that the County’s current lawsuit against the Deputy Sheriff’s retroactive pension spike was a sure loser, and that he would share information on-line about all meetings with lobbyists. But he dodged answering the specific question about supporting regulating those lobbyists.

Nelson also took credit for courage in supporting Sharon Quirk to be mayor of Fullerton. That elicited snickers from many of the NUFFsters and maybe even from Pam Keller who was sitting toward the back of the room.

4. Tom Daly. He appeared to have popped too many quaaludes before the program, but maybe that’s just his style. He talked a lot about all that he got done as mayor of Anaheim, perhaps hoping that the NUFFsters were unaware that the Anaheim mayor is simply one of five votes. He appeared to be the the most knowledgeable about the way the County government is actually constituted, but that sort of familiarity comes with a price tag: career politician; and it did not produce any inspired ideas of reform, restructuring or right-sizing.

Daly took some oblique shots at Chris Norby for failing to deliver park funds which was fun because Norby was hovering in the back of the room like the amiable chorus in an Aristophanes comedy. Whether Norby was even paying attention is unknown, though unlikely.

At the end Daly rolled out his big guns. 1) He was opening his satellite office in Fullerton on Sunday, Feb. 14 to perform bureaucrat weddings (no mention about paying employees overtime to do it); 2) he had worked out a deal with the Lincoln Library to host a road show of Old Abe memorabilia. This produced some chuckles later in the FFFF editorial room as we recalled our post on Daly and another dead Republican.

5 & 6. Harry Sidhu and Lorri Galloway both took a powder. They were not missed. Their presence would no doubt have simply added another half an hour to an already pretty depressing evening. Still, credit to the NUFFsters for putting the event together, and shame on Sidhu and Galloway for blowing it off. Were they afraid of having to deal with the carpetbagging issue, or just their inability to talk cogently about bedeviling County problems? They needn’t have worried.