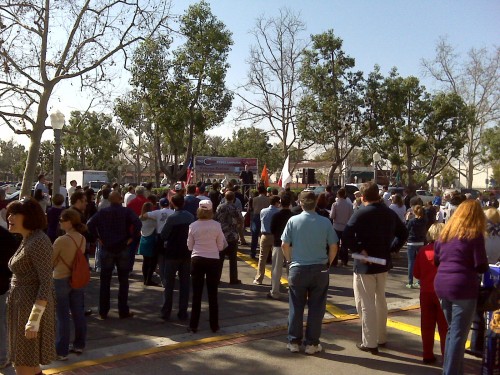 The event was sponsored by the Tea Partiers, but the focus was to those in attendance to go out and gather signatures for the paycheck protection initiative that would protect union employees from the union automatically taking dues from the paychecks of their members and use the money to fund political campaigns that might be distasteful the members..

DeVore, who is running to unseat Senator Barbara Boxer, read from old Abe’s famous “four score and seven years ago” speech and then related that to the current cycle of of money and politics that has pushed California and many local governments to the brink of fiscal collapse.

The funnest part of the event was confronting a Harry “Carpetbagging” Sidhu paid staffer who was handing out Harry fliers. I asked him if he knew where Harry lived, at first he gave me a line of baloney about how carpetbagging is a good thing and then admitted that he knows all about carpetbaggers because he worked on Ackerwoman’s scampaign, and that Harry’s probably going to lose, but he needed a job and Harry has deep pockets.

Enjoy some of the highlights of the event: