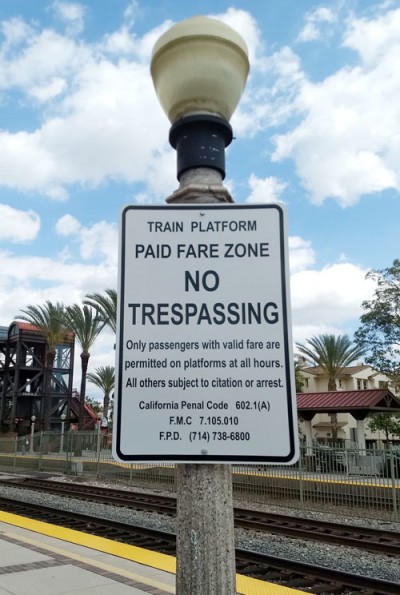 Some of you might remember Fullerton’s previous attempt to deal with homeless persons at the train station.  Those signs were removed not long after my blog post went live.  Fast forward to this week, the City has tried once again with a different strategy — declare the train station a “Paid Fare Zone” with threats of citation and arrest.

This attempt isn’t any better, taking the form of a metal scarecrow decorated with words.

7.105.010   Trespassing unlawful.
It is unlawful for any person to be upon any publicly or privately owned property at any time, except upon lawful business, or with permission of the owner or person entitled to the possession of such property. (Ord. 2799, 1992).

I doubt that ordinance was intended to declare public property off limits merely on the basis of convenience, as they seem to be doing here.  So it’s more than likely any attempt to enforce a “paid fare zone” under the guise of Trespassing would be decimated by a good, and maybe even a bad(!) attorney in court.

Nevertheless, this whole thing demonstrates an embarrassing amount of ignorance on the part of City Hall and the Police Department.

1. The “Paid Fare Zone” Must be Violated to Buy a Ticket.

A person wishing to buy an Amtrak or Metrolink ticket must access the platform — and violate the “paid fare zone” — before they’ve had an opportunity to look at the schedule board or buy a ticket. 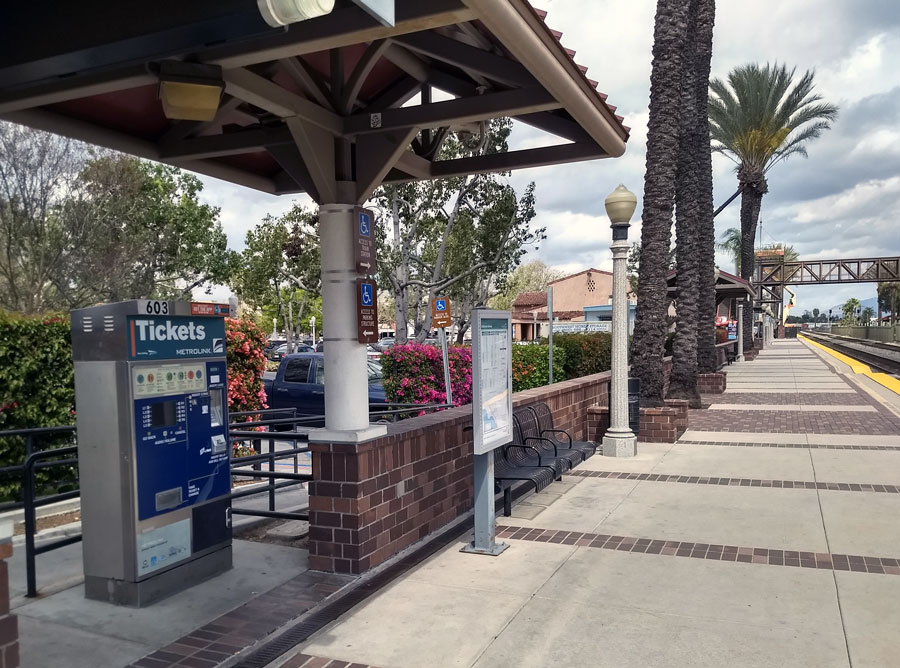 Same story on the south platform, take five steps off this OCTA bus, and you’re immediately in violation. 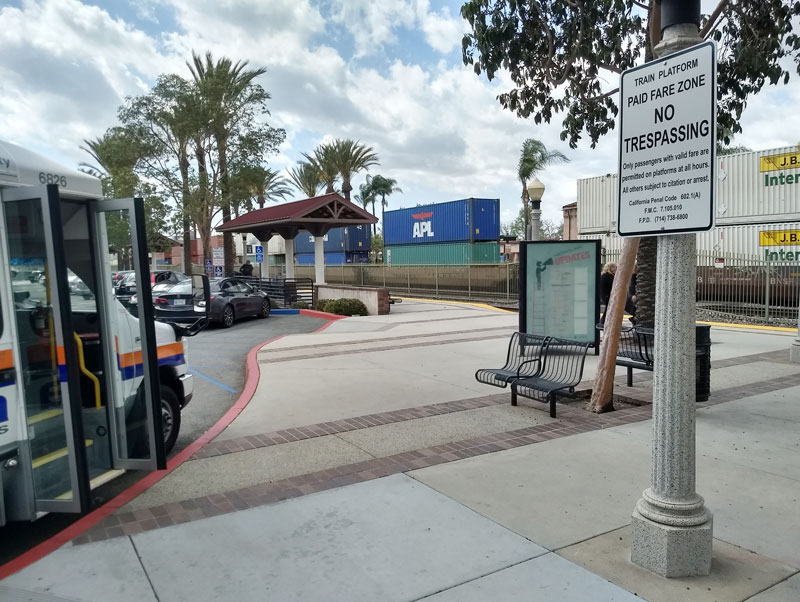 2. Good Reasons Not to Have a Ticket.

Metrolink tickets have a 3-hour time limit on One Way, and the first segment of a Round Trip ticket.  Say you’re traveling somewhere like Ventura or Palmdale with a necessary layover in Los Angeles.  A ticket purchased too early will expire before reaching your destination, and subject you to a possible citation.  People in this situation often wait until the very last minute to buy a ticket.

Amtrak tickets can be purchased on-board the train, meaning you won’t have evidence of a paid fare while on the platform.  This is not the usual way of doing things as you would normally visit the ticket office.  Nevertheless, they allow it.

Both Amtrak and Metrolink have e-ticketing options that allow purchase up to the last minute using a smart phone.

Any strategy that bullies passengers into buying tickets a certain way to comply with a “paid fare zone” is no good.

Amtrak has two or three employees who remain indoors most of the time, and Metrolink has zero employees on site.  There is no dedicated security or police force.

Until this week, a person traveling alone could be accompanied by a friend or family member dropping them off until their train departs.  But now, fewer people allowed on the platform makes everybody less safe.   Who’s going to call the police, or intervene in a bad situation, if a lone passenger is being attacked and nobody else is around? 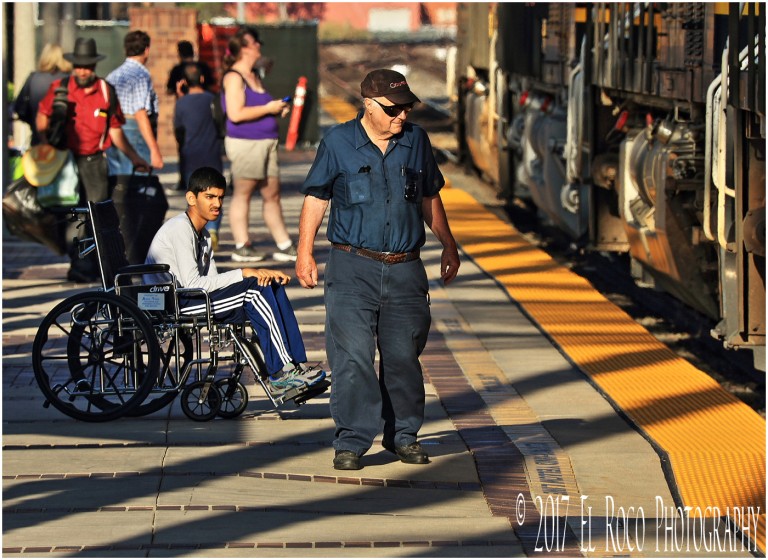 Elderly or disabled passengers will have added difficulty getting around and hauling their luggage to the train.  That’s because nobody is available to help.  There are no luggage carts like at an airport, and no employees on an electric cart to assist.  This is just another reason why a “paid fare zone” is a terrible idea.  Instead of allowing a passenger’s loved ones on the platform to assist them on/off train and help carry their belongings, it’s just a matter of time before somebody falls and suffers a traumatic injury.

My friend took the photo shown above.  The man in the wheelchair cannot wheel himself around and is dependent on others to help him.

How does the City expect people like him to get to/from the train when his caregiver must buy a ticket to legally be within the “Paid Fare Zone”?  That’s not only ridiculous, but probably illegal under ADA laws that protect caregivers.

4.  The Pedestrian Bridge is a Public Thoroughfare. 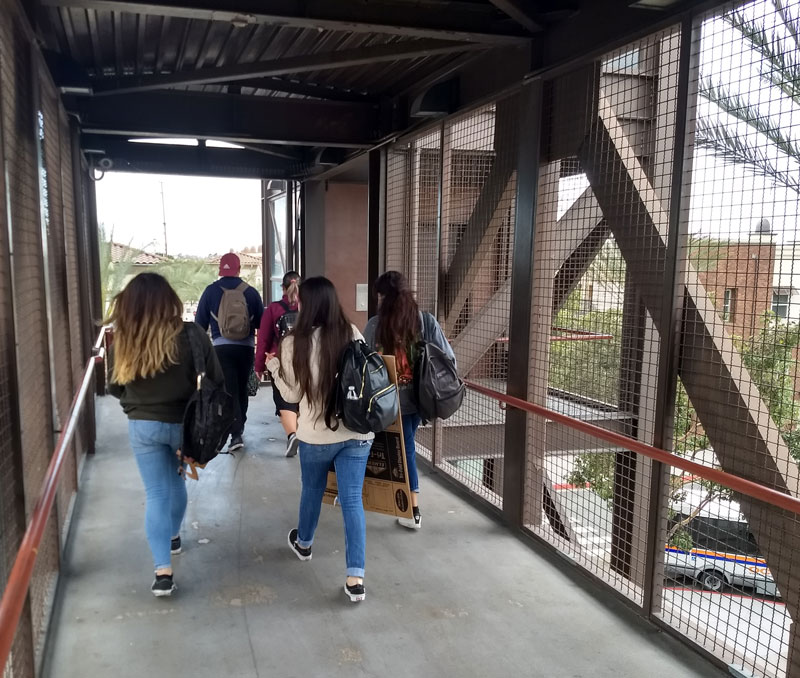 One of the justifications for building the pedestrian bridge in the early-1990’s was to connect the neighborhood south of the tracks with Downtown Fullerton so people didn’t have to cross the train tracks at ground level and risk getting hit by a train.

There’s literally hundreds of people who use the pedestrian bridge daily, many of them kids walking to/from Fullerton High School.  But under the “paid fare zone” they too must enter the zone without a ticket and risk citation or arrest.

People have visited the train station to watch trains and socialize with others for over a hundred years.  There’s nothing inherently strange about it.  Anybody raised in Fullerton was probably brought here by their parents at a young age to do the same.

There are small, informal groups of railfans who do this on a more frequent basis and congregate on the platforms various days of the week.  Some of these groups include current/former/retired City employees.  We also have railfans from other parts of the United States, Canada, Europe, and sometimes Asia who visit Fullerton just for this reason, and they frequent many of the downtown restaurants.

The regular Fullerton railfans are an extra set of eyes and ears for any sort of bad situation or suspicious activity.  Railfans have pulled suicidal people off the railroad tracks, and have come to the aid of injured railroad employees or passengers before.   They’ve also prevented high speed derailments at the train station by noticing track or equipment defects gone undetected.  Many of the police calls for service originate with one of the railfans noticing something not right.

All of these things make Fullerton a better place, all at no cost.  To expel them from the platform because they don’t have a ticket is foolish.

The fact these signs are intended to drive the homeless away should be painfully obvious.  There’s no other justification to put them up.  My sources at City Hall are saying FPD Cpl. Dan Heying in his role as Homeless Liaison Officer, Dave Langstaff and Ty Richter in Public Works, the City Manager’s office, and Deputy City Attorney Ivy Tsai are all involved.

I’d like to believe this is an innocent mistake on the part of the City.  But the speed at which the signs are removed (again) will be the real test.

35 Replies to “Visit the Train Station and Go To Jail”